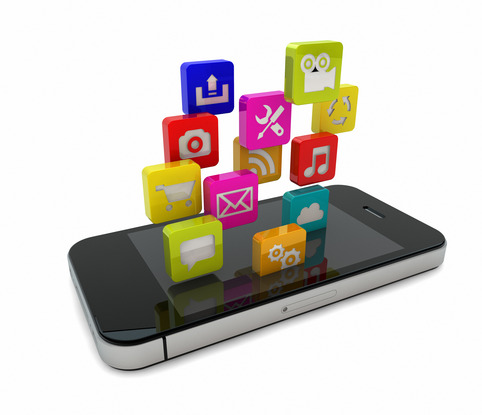 The App Economy has been the talk over the recent years. You probably have read stories of entrepreneurs who earn millions from apps which only cost them a few hundred dollars to develop. Some have even created companies that have been acquired by tech giants like Bitzio. So, you have an app idea, have assembled a team to build the app and are expecting to generate massive revenues when you launch. But first, where are the customers?

Web and mobile apps are hot. According to a report released by technology trade group TechNet, over 466,000 jobs have been created in the US, thanks to the increase in demand for apps. Entrepreneurs are creating all kinds of applications, from games to quantum physics, which run on smartphones, Facebook and computer tablets. The “app economy” is booming and as mobile computing technology improves, more companies and local merchants are demanding an app for one reason or the other.

However, the reality of big money in apps is subjective. Just like is with any business, there are thousands of apps in the market and only a handful bring their owners significant income. According the Developer Economics 2012 report, which is freely available, making big money in the app economy is far from a sure thing. Before you invest in creating an app, we suggest you take a look at the report. The key findings of the report include: 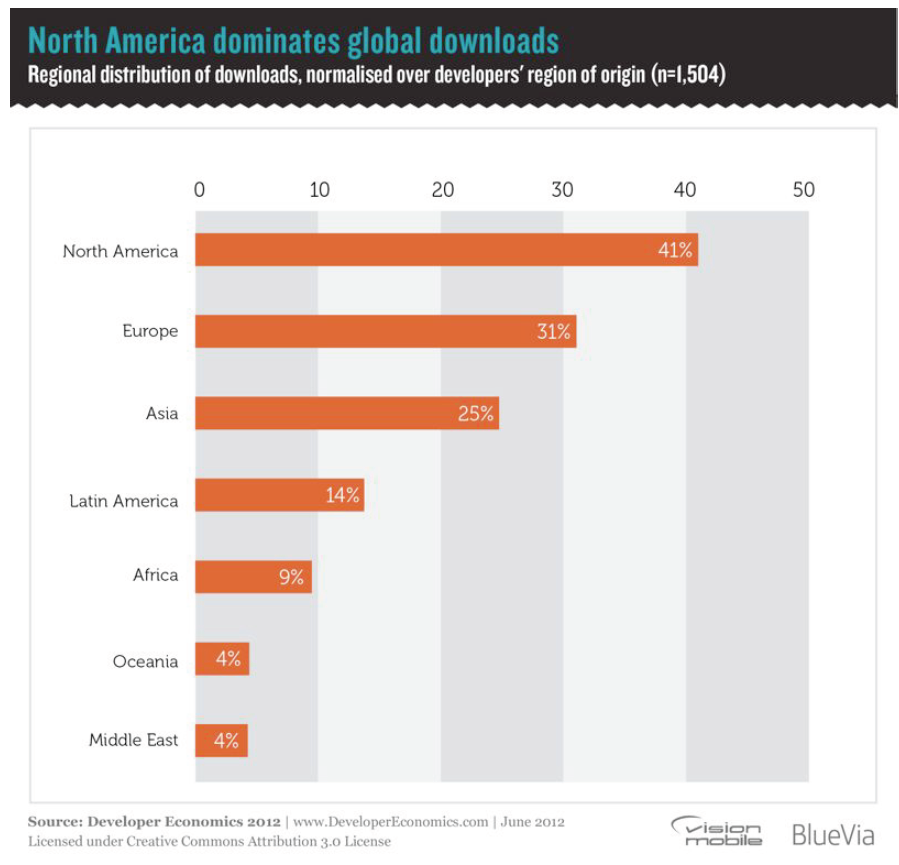 Top App Regions in the world 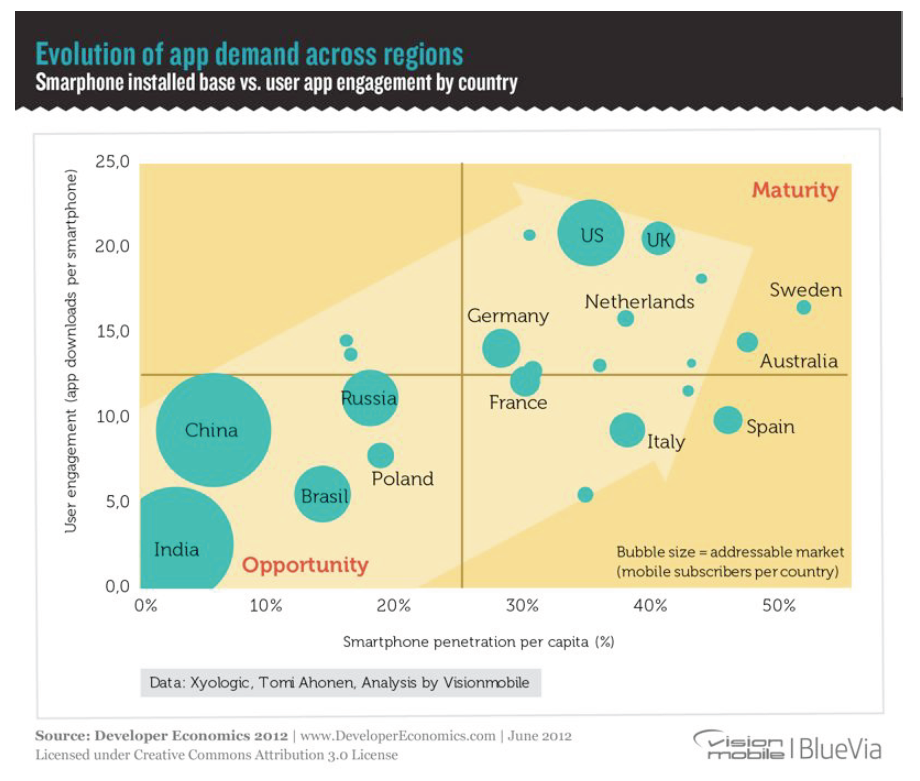 Evolution of app demand across regions 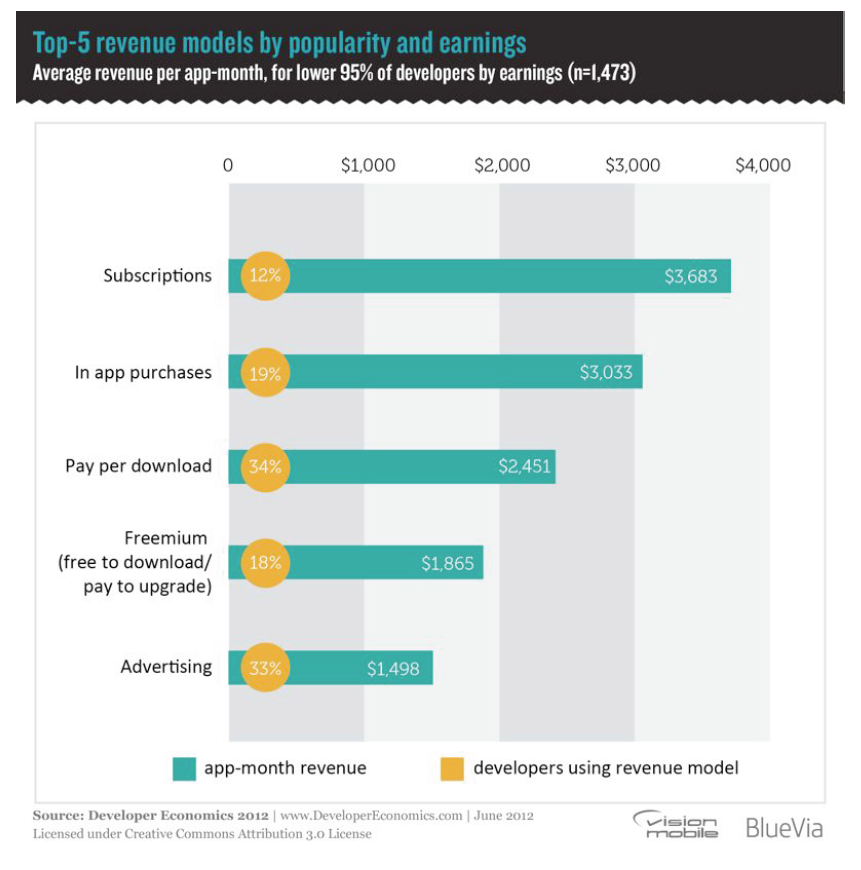 Subscriptions should be the focus of the App Developers

The Problem with Monetizing Apps

Most companies or individuals are finding it difficult to monetize their apps because of lack of users. With millions of apps already in the market, how do you get the users to give you substantial income. Moreover, most apps are either offered for free or are priced at $0.99. To make substantial revenues, you need a whole lot of users who will pay for the app. Unlike most online businesses, the price for apps is simply too low and without a significant user base, you are likely to end up among the developers in the app poverty line. Therefore, before you invest your resources and time to build an app, think about users.

Most of the apps that are offered for free are usually supported by advertisements. However, the advertisement rates are so low and you will need a significant number of customers to really generate income solely from app ads. As a result, most developers have two versions of their apps; a free and paid version. The free version is usually supported by ads and has limited functionality while the paid version is ad-free and has more robust features. However, before you develop a paid app, find out whether there is a market for it. Before you set to build an app, think about the solution that you are providing to customers. There are many great app ideas that you can pursue. But it helps to develop an app for users that you are already familiar with. Your app should attend to the needs of an already existing market. Another example is offering app development and related services to customers. For example, you can approach the local restaurants in your area and offer to build them a simple app that shows their menu, directions, special offers, etc. Instead of charging the restaurants a one-time fee, charge them a monthly or annual recurring fee. I know what you may be thinking now.  You think I’m crazy to ask you to charge a subscription fee for app development. Here is one company that is doing app development for you at a subscription pricing – Corona. There are many development companies who will build an app and charge a monthly fee. Another great example of app economy is building apps in marketplaces like Salesforce.com (AppExchange).  You can easily create an app that addresses the problems or issues that Salesforce.com can’t solve. One perfect example for this type of app subscription is AppBuddy. It was acquired by Salesforce.com.  Gridbuddy, a product of AppBuddy cuts out excessive navigation involved in any Salesforce data entry process.  It is an amazing app loved by lot of businesses as it simplifies using Salesforce.com. And the greatest advantage with this model is that you can charge your customers a monthly or an annual recurring fee. App subscription is better than one time feesfor various reasons. These include;

Like is the case with any subscription business, you need to watch your cash flow, refund requests and percentage of customers that do not renew their subscriptions. These issues can be addressed by ensuring your product is flawless. Ensure the app does what the customers are expecting, eliminate any bugs and make it easy for customers to purchase the app. Use the major app stores like iTunes and GooglePlay to distribute your app or if the app targets businesses, use marketplaces like AppExchange of Salesforce.com Marketing is also crucial to the success of your app. Some apps may go viral, such as what happened to iFart, but for most app developers, marketing has to be done. Online marketing including search engine marketing, content marketing and social media marketing are important to generating new sales and increasing market share.

How to Make Money With Apps

After developing an app, you have various opportunities of making money with it. In the app economy, the general rule is that the more the number of users you get, the better it is for your business. Moreover, with support not taking a toll on our business like is the case with other subscription commerce business; you are guaranteed to generate tidy margins. To sum up, below are some ways of making money in the app economy;

Advertising: This is the most common way of generating revenue with apps, if your app is free. For you to generate significant revenues with ads, you need a large user base. You will need to sign up with mobile advertisers to allow ads on your app. For example, have an advertising space within your app. Check AdMob by Google.

Paid Download: They pay you a fixed fee, end of story.  But it does make sense to keep them in your list and keep nurturing them. You may have another app that might be of interest to the customer.

Get Sponsor: No money to promote your app? No problem, you can get an exclusive sponsor for your app.  Why? Without marketing you can’t succeed in the app economy as there are over one million apps in the world and the competition is very high. When you get a sponsor for your first app, you’ve the option to develop another app and make money from it.

In-app Purchases: Deliver as freemium and offer extra features as an upgrade.

Custom app works: You can also develop custom apps for business or companies. This is what most app development companies are doing. For the companies, make a point of charging them a subscription fee rather than a one-time fee for your services. Another way to approach the custom development work is develop the app, then sell “Support and Maintenance” for the app developed as a subscription fee. Cloud based Software business can also also sell “Support Services” as an add-on to their existing customer base. And when you decide to bill your customer on a recurring basis, there will always be a confusion whether to build it on your own or get the system from an expert. Watch the video below to decide for yourself.

The app economy is booming but the fundamentals of online business still apply to it. You need to identify your market and market your app to customers to generate revenues.