“The greatest danger in times of turbulence is not turbulence itself, but to act with yesterday’s logic” – Peter Drucker

At a time when the global recession is only set to get deeper and unemployment numbers in the US are reaching the Great Depression-era levels, one company is posting record numbers amid the economic crisis. In its recent second quarter, Adobe posted its highest quarterly revenue ever of $3.13 billion, a 14% growth over the previous year. It is estimated to clock an annualized revenue of $12.73 billion in 2020, its highest ever in its history.

So, what’s helping Adobe thrive in one of the most challenging times we’ve ever seen? The power of recurring revenue. Adobe was early in identifying the potential of a subscription model. Till the launch of its Creative Cloud offering in 2012, Adobe was selling software in a box. In 2013, the company decided to transition to a subscription model.  Since then the company has seen a 10X increase in valuation and 4X increase in earnings. From a recurring revenue of around $200 million in 2013, it now clocks an annual recurring revenue of over $5 billion.

The subscription model helps companies build more resilient businesses with predictable revenue, higher customer retention, and improved profitability. So it’s no surprise that the model is catching the attention of companies even in the non-digital sectors. For instance, the growth of IoT and cloud-based services is driving the adoption of the subscription model in the manufacturing sector. Product-centric firms such as Caterpillar and John Deere offer subscription services offering data and analytics around their equipment to counter the cyclicality of their revenue.

What’s more,  investors are rewarding the resilience and revenue predictability of the subscription model valuing companies with a recurring revenue model almost eight times higher than comparable companies with a transaction-led model. According to Bessemer Venture Partners, the average valuation of the Top 100 private cloud companies have increased by 58% over the past four years: In 2016, the average company on this list was valued at $1.05 billion, and in 2019, the average grew to $1.66 billion.

The coronavirus pandemic has only hastened digital transformation and businesses need to embrace the cloud or build this dynamic of recurring revenue into their business model to avoid becoming irrelevant. So it is not really surprising that most of them are looking to put their weight behind the subscription revenue model. According to strategy consulting firm, Manifesto Growth Architects, nearly 70% of businesses believe that the subscription model holds the key to their future growth. You’re thinking subscriptions are an easy sell, then. But here is the hitch, only 24% of businesses are currently implementing subscription models, with barely 7% generating significant revenue through subscriptions.

The gap between aspiration and reality is due to siloed operations and fear of disruption. Traditional systems aren’t built to support recurring revenue since there are many siloed processes that make it difficult to manage subscriptions and the entire customer lifecycle. According to a survey by CFO Research/Salesforce show that nearly two-thirds (64%) of the companies launching recurring revenue businesses are facing operational challenges. Over two-thirds of  (68%) of the CFOs are evaluating new automated systems to support recurring revenue since customer renewals often turn into a nightmare when relying on traditional systems.

Even as  44% of businesses see their legacy billings as a barrier to growth and about 59% cite significant friction due to billing disputes, introducing subscriptions is seen as risky as they could disrupt the existing ERP and CRM systems that form the core of their perpetual revenue.  Successful subscription management is far more than just enabling recurring revenue. It involves rethinking your product strategy, customer engagement, and marketing.

You need a lot of cross-functional collaboration since customer response is on a real-time basis. So you need to build for business agility across all the functions.  Since traditional systems are not designed for all of that, there are limitations from not being able to set up processes to track recurring revenue, leverage the data arising from subscription sales to using the right metrics to track the health of the business.

The Journey to Subscription Success

Since transitioning to a subscription business involves many moving parts, it is best that you draw up a strategic roadmap for the transition like this one below. 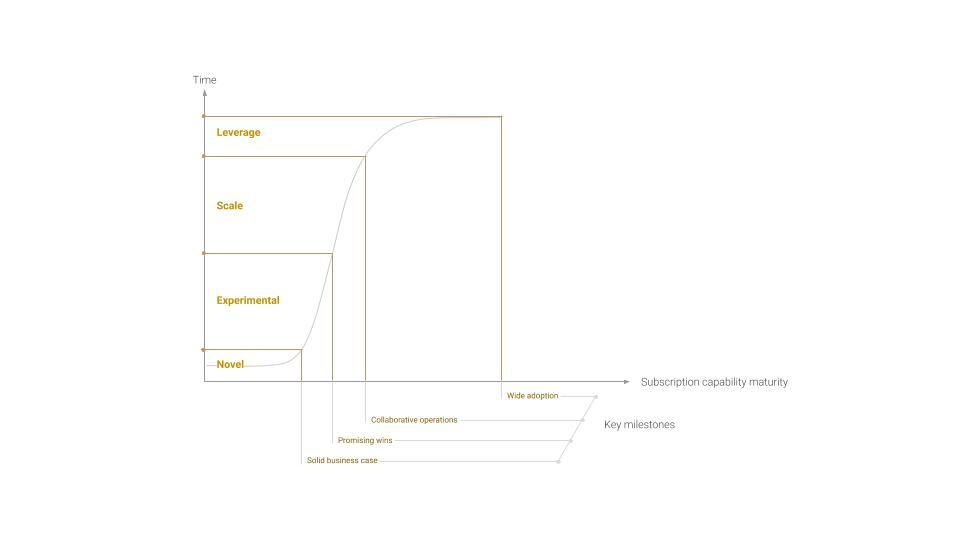 You can start with a pilot experiment like what Adobe did just before they launched their Creative Cloud. Adobe first did a pilot subscription-based pricing model for its Creative Suite Software in Australia as early as 2008. The learnings from the pilot project about pricing, product value, and customer behavior and the fact that cloud-first companies weathered the 2008-09 recession better formed the basis of the launch of its Creative Cloud offering in 2012. The company decided to move to a subscription model when they realized that they had to wait 18 months to release new product features (which was the company’s cadence at that time) and the software was so costly that users didn’t always upgrade. So from having products in the price range of $1300- $2,500, the company moved to $10-50 per month per user subscriptions.

While they were experimenting, they offered similar products under a subscription model and the traditional licensing model. The company found that the subscription model was bringing a lot of new users, solving one of the main problems they were facing, of growing the user base. For Disney, the move to subscription through its streaming service Disney + bought in more than 54 million subscribers within the first six months of its launch. The only bright spot for the world’s largest entertainment company which has borne the brunt of the coronavirus. Disney took a  $1.4 billion earnings hit due to the pandemic thanks to its theme parks and cinemas being shut down the world over and no live sports on its ESPN network. While subscription revenue could form 5% of its annual revenue of $69. 5 billion in its first year, industry experts say Disney Plus has the potential to be $30 billion in five years given the boom in streaming services.

In a recent interview with TechCrunch Adobe CIO, Cynthia Stoddard said that one of the key lessons to managing such a transformation was that they didn’t try to do everything at once. “One of the things we didn’t do was say, ‘We’re going to move to the cloud, let’s throw everything away.’ What we actually did is say we’re going to move to the cloud, so let’s iterate and figure out what’s working and not working. Then we could change how we interact with customers, and then we could change the reporting, back-office systems, and everything else.

Microsoft put together a ‘Subscription 101’ development program to help its Microsoft Office team understand how subscription models work and what it means for all its functions across the organization.

Indeed, while the transition can seem a little daunting at first, it does not require an overhaul of your current systems at one go. You can tweak specific functions of your current systems to handle the myriad interactions of a recurring relationship. Once you launch your subscriptions, you can put in place an automated billing and revenue management system to manage dynamic pricing, customer renewals, upsells, and discounts. After a few early wins, you can build out and scale parallel lines of operations before moving into an organization-wide adoption.

When there is a large-scale paradigm change, the leadership and management team need to proactively communicate with all the stakeholders including employees, vendors, and investors about the execution, addressing their concerns. When you transition from an asset purchase model to a subscription model, there is a period of low revenue growth and high investment costs.   In their book “Technology-as-a-Service Playbook: How to Grow a Proﬁtable Subscription Business,” Thomas Lah and J. B. Wood refer to this transition period as “swallowing the fish,” as the revenue dips you move to subscriptions and investments costs remain high in the initial years before the revenue curve climbs back completing the fish curve.  When Microsoft moved from primarily providing hardware to a subscription cloud-based model in 2014, it went through a similar phase of low revenue and high investment costs during the first couple of years. But since 2017, they have never looked back. Microsoft added more than $ 29 billion in total revenue between FY17 and FY19 (fiscal year ends in June), expanded its margins from 26% to 31% which increased its net income from $25.5 billion to $39.2 billion. 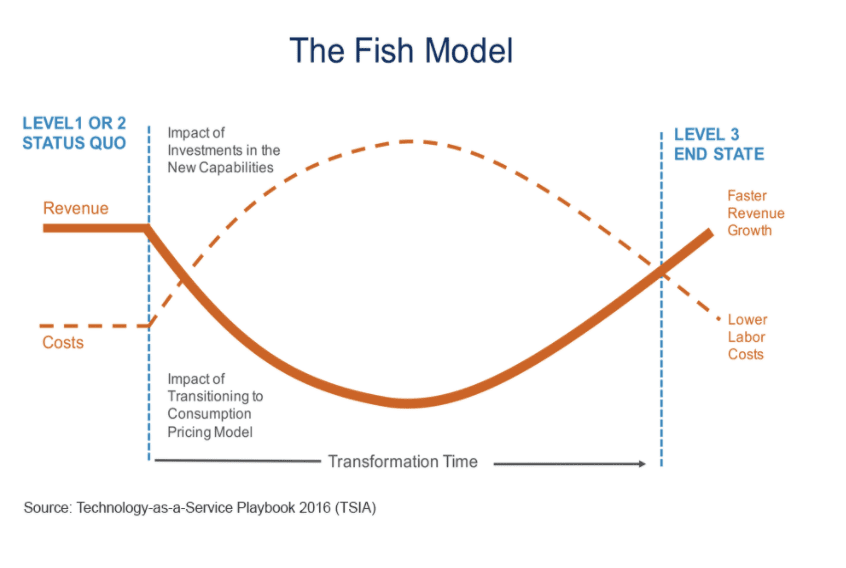 It is clear to win the digital transformation companies need to start adopting the subscription model.  The subscription business gives you deep customer insights and allows you to proactively alter your product value offering to meet the changing customer needs rather than wait for your partners to relay what the customers want or worse be disrupted. Dan Cohen, former VP Strategy at Adobe who advocated its shift to the recurring model says, “Don’t wait until someone is disrupting your business to start moving to the cloud or, for that matter, making any kind of necessary transformation. It will already be too late. It can feel risky to make this type of move, but once you recognize that the market will go in the new direction with or without you, there’s really no other choice.”