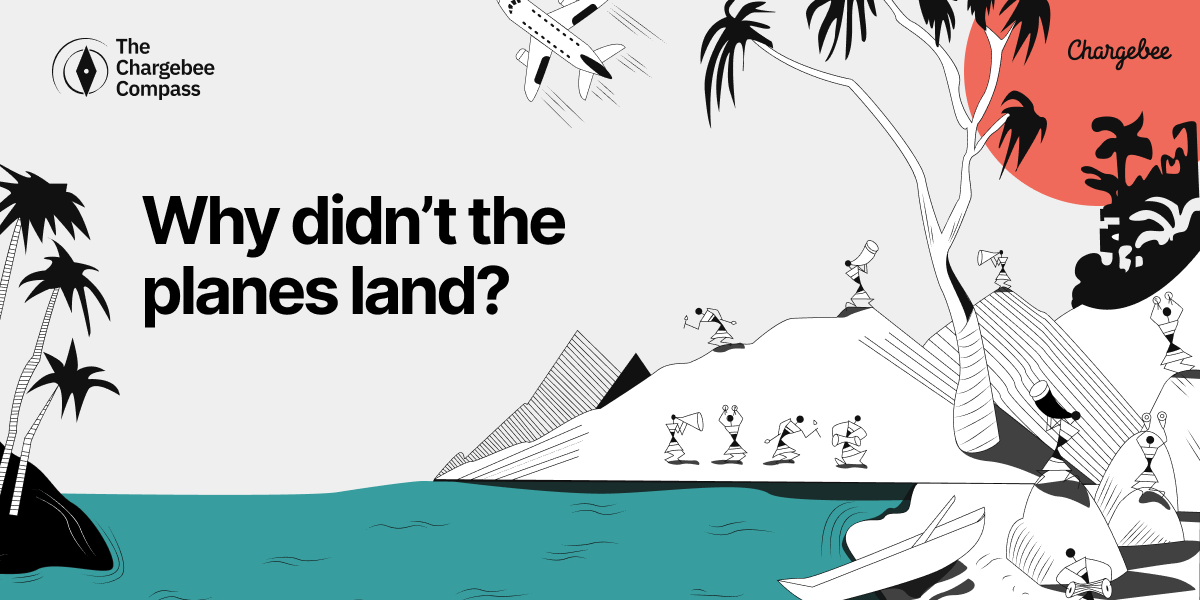 Okay, we've all been there. We see people amassing a massive following on social media and think, hey, we could do it too. I could lipsync just as well, write book reviews frequently, and my cat's probably funnier.

We instinctively decode social or financial success and try to replicate it. And people behind products, big and small, often operate on the same thought. Sometimes it works, and sometimes, it doesn't. Why?

During the second world war, the US military set up bases on remote islands in the South Pacific sea. The islanders saw airplanes for the first time and received essentials like food and medicine from the US military. The war's end resulted in abandoned military airbases and an abrupt end to islanders' food supply. Now craving another hit of Coca-Cola, the islanders tried to decipher how they could manifest the arrival of the 'godmen' again. Build it, and they will come, right?

So they made makeshift runways, lit fires on the sides to make it visible from the sky, and put two wooden pieces on a man's head to look like headphones with bars of bamboo sticking out like antenna. They had the runways and the controller; they did everything right, but no airplanes landed.

The famed physicist Richard Feynman used this incident to highlight the pitfalls of 'Cargo Cult Science' in his 1974 speech at the California Institute of Technology. The idea holds, regardless of whether you apply it to academia or business. Mimicking your competitors' strategies won't guarantee success unless you deeply understand your operating environment.

When Instagram released Stories to steal some of Snap's momentum, it was touted as the photo-sharing app's smartest move yet. Instagram Stories has attracted more than 400 million daily users and changed how people share and consume things online. Three years later, when they tried to squash their newest rival, Tiktok, Reels failed to get the same resounding approval from its user base. Why?

TikTok is short, entertaining videos - it doesn't pretend to be anything else. TikTok's network is built to cut through the community building and taps directly into our need to go viral; you make content for strangers. A feature birthed by such a network might not work as well in an environment like Instagram, which incentivizes users differently.

Instagram operates on a social graph (content from your friends). Still, its increasingly forceful push towards an interest graph (content from people about things you might be interested in) has been jarring to many users. Despite reels' evident virality and addictiveness, it's also thrust Instagram into an existential crisis. So was this a swing and a miss?

You could be underpricing your homemade salsa to outdo your rival stall in the farmer's market, or you could be the giant Meta trying to steal screen time from a multi-billion dollar competitor - surprisingly, similar rules apply.

Now place your hand over your heart and tell me what was the last time you tried to mimic a competitor's success and how did that work out for you?

There's a delicate balance between platform culture and viral arbitrage — and most social networks are on the wrong side. How platforms turn boring [The Verge]

Eugene Wei, who has led product at Hulu and video for Oculus at Facebook, analyzes how social media platforms structure their graphs and why the network provides the lion's share of the value for a social network.

Top posts from our library

The opposite of blindly mimicking a competitor isn't doing something wildly original. It could also be taking a well-proven strategy and adapting it artfully to your specific use case. In this week's Compass, we're looking at companies that have achieved this and how you can too.

How did HubSpot define the 'free' in freemium to disrupt a saturated CRM market?

Why your organization needs an efficient experimentation engine >

In the last episode of this season, we sat down with Jodi McDermott, a data-driven product executive with more than 20 years of experience in digital technology, analytics, and product management. Listen to Jodi dive into topics such as agile development, strategic planning, product growth, and the importance of involving your team members in your strategic planning process.

We're peeking behind the curtain of two viral products and analyzing how they took different turns on the Gartner hype cycle.