Is it worth it?

It’s a question that has troubled buyers for ages.

On most occasions, it doesn’t fail to stir up a spat between emotion and reason. The answer to which might entail – absolute happiness or untold remorse, or both of them in any idiosyncratic order.

As you read this, someone’s probably going over your offering, rubbing their chin and contemplating the same question.

And of course, you are always trying hard to ensure that this question becomes less perplexing for potential customers. But you also want to grow.

So, you’re always on a lookout for that additional lever, that could be tweaked to get a positive impact on your bottom line, and pricing is one such lever.

There are two interesting rules to SaaS pricing –

– NEVER break your promises, stick to what you’ve committed.

– No pricing strategy is perfect. Always be testing.

Conflicting. Counterintuitive. That’s how it is.

The right price for your product is what your customer is willing to pay.

Whatever price you choose for your service – be it enterprise pricing at $1000 per month or $10 per month like Buffer. Whichever route you take, you need to keep the experience consistent for customers.

Definitely a $10 Buffer customer is not expecting you to jump into a Skype call and help him get started.

But if you’re positioning yourself as an enterprise solution, then be ready to provide that “white glove” service, as the promise & experience must stay consistent.

So, how do you know if there is scope to improve pricing?

Consider this example. We have been tracking Hubspot’s pricing model for quite sometime. They started off as a much more affordable product. They learnt that the customers are not experts in “Inbound” and they had to evangelize & educate their customers.

Then they introduced $2000 setup fee for consulting – they committed 6 hours of time to get you onboard & charged $1,200 per month.

In effect, they were ensuring that customers were set up for success & charged a premium for it.

Also, the perception was that customers had to be at a certain level, willing to commit resources to use their product.

In a way, it became aspirational for customers who were reluctant to shell out time or money on something that would take long to produce desired results.

No matter what your pricing is, there is always an opportunity & a customer base that is willing to pay for that service. The challenge is to keep the experience consistent with the promise.

The Legend of The Potato King

Frederick II reigned over the Kingdom of Prussia from 1740 until 1786, he is considered as one of the greatest military strategists of all time.

Here’s what Napoleon had to say about this Prussian bloke –

“Hats off, gentlemen, if this man were still alive, I would not be here.”

Apart from battling the Austrian and French armies, he also had to deal with a more lethal enemy, famine.

He knew that a plausible solution to reduce the risk of widespread hunger was to diversify the diets of people, so that they at least had a few crops to rely on, potato with its nutritional properties seemed like a good choice.

In 1774, he made it mandatory for people to cultivate, harvest and eat potatoes.

People refused this proposition. They complained that potatoes were terribly ugly, tasteless and that even their dogs won’t eat them. He tried to educate people about the virtues that potatoes possessed. That didn’t work either.

The resentment was met with stern measures. There are records of people being executed for refusing to grow potatoes. This didn’t help as people continued to perceive potatoes as an evil crop.

But he didn’t give up and tried yet another approach.

This time around, he declared potato a royal vegetable and also that no one except the royals were allowed to eat it. Then, planted them in a royal garden with royal guardsmen who were instructed not to do their job well.

With some help, potato thieves successfully made it to the fraternity of 18th century outlaws and potatoes thrived.

Potatoes remained potatoes. Tasted the same. Looked the same. But equipped with a new frame of reference, people started thinking about them in a different way.

What Frederick II witnessed was a testament to the fact that people’s behavior can be influenced by changing their perception, and that perspective is everything.

Okay. Legends are fine. Potatoes are fine(mashed or otherwise).

But what has all this got to do with pricing?

When it comes to pricing, we think we’re dealing with absolutes, but we aren’t. Our understanding of value is flawed.

One of the great mistakes, I think, of economics is it fails to understand that what something is, whether it’s retirement, unemployment, cost, is a function, not only of its amount, but also its meaning.
Rory Sutherland

As per classical economic theories, all value is objective.

Which essentially means that if you factor in all the costs involved in getting a product out to the market, the production costs, the labor costs and others, you’d be able to figure out the product’s value.

Classical Economics doesn’t take into account the impact that psychology has on our decisions. Thus, it makes us look at things the way they are, wherein lies the problem, because as humans, we tend look at things as what we think they are.

People buy from you if they find value in your offering, and this value relies entirely on how they perceive it.

Think of all the interfaces that people have to deal with before they make a purchase decision. The copy that you use, the design of your product, your email’s signature. Tangibles and intangibles. All of them.

All value is perceived value.

If you can figure out a way to change how people think about your offering, you’d be able to increase your sales without making any fundamental changes to your product.

It isn’t manipulative. It isn’t magic. You can’t just create value out of thin air.

And every once in a while, we’d love to ditch Siri and her cousins.

So, you don’t have to automate everything.

As interactions with other human inhabitants on the planet are great, not just because they’re kind of reassuring that our dystopian future is still far off, but also because we still value the sense of connection that has developed over millions of years.

In the early days of CD Baby, a startup that enabled independent musicians to sell directly to consumers, Its founder Derek Sivers did something special.

He ran the best music recommendation engine in the world, without a killer algorithm.

He did it on his own. The taste for good music that he had acquired as a musician was put to great use, as he listened to each new album and came up with recommendations of other relevant stuff.

Soon, they started getting hundred albums in a day.

Did he automate the process? Nope.

How did he scale then?

Well, here’s how he did it – He hired someone just to listen to the music and recommend similar good stuff. Yes, that was an actual full-time job. He understood that those recommendations were valuable and ensured that they were kept intact.

Of course, automation is important. If not at the start, at some point, you have to build systems that are efficient and scalable. But sometimes, you have to take a call and decide on things that shouldn’t be automated. As Derek puts it himself, a little human intervention can be a competitive advantage.

When everyone else is trying to automate everything, using a little human intervention can be a competitive advantage. The problem is when business owners see it as a cost, instead of an opportunity. Trying to minimize costs, instead of maximize income, quality, loyalty, happiness, connection, and all those other wonderful things that come from real human attention.
Derek Sivers

People who buy shoes from Zappos. Collectors of Cole Porter records. Writers who use WordStar 4.0. People who drove a Volkswagen Beetle in the 1960s. People who still drive an 18.6 feet long Cadillac Eldorado. They all have two things in common: they don’t have anything in common, and they belong to a tribe.

Being a part of a tribe serves our innate human desire to identify with people who believe in the same ideas as we do. You don’t need a war cry to rally people towards a shared sense of purpose.

If you can figure out a way to make people care about your product, not everyone, just the ones who’d find it most valuable, the ones who’d relate to it as an extension of their own identity and then care enough to tell their friends about, you’ve made something valuable and it’s value will compound as your idea spreads.

Remember, barrels, aluminium and the power of your product’s story

Why does one have to know that their favorite distilled spirit that’s made out of water, barley and yeast, spends 18 years in the confines of Spanish oloroso wood and American oak barrels, somewhere in Scotland?

Details matter. People value them. What’s obvious to the maker might be amazing to someone else.

On a merry note, let’s digress from the world of spirits.

Telling people about the time, the effort, and the meaningful specifics that went into your product, helps construct an experience, and changes the way people think.

Here are two examples from the tech industry – 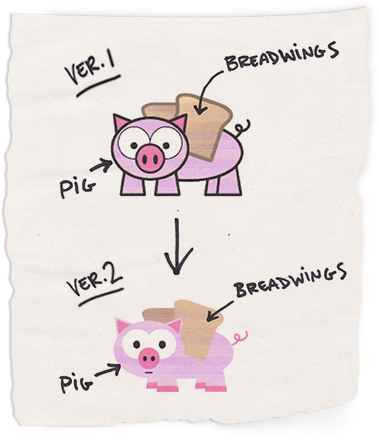 Let’s get to work

Rethink. Reframe. Redescribe. Put it out there.