If you’re like many business owners, there’s a question that may keep you up at night: “Is my pricing model right for the market?” After all, 98% of SaaS companies see success by making aggressive changes to pricing.

For many businesses, it comes down to two options: a consumption model or a subscription-based model. If you’re going to make the right choice, you’ll need to fully understand both.

The good news? We’re here to help by outlining why a flexible consumption-based pricing model might be the right fit. We’ll also share four reasons why you might be better off with a different strategy.

To head straight to the section which interests you most, click the links below:

What is the consumption model of pricing?

Companies that use a consumption-based pricing model, also known as usage-based pricing, charge customers per unit of usage, rather than a fixed monthly rate. Around 38% of SaaS companies opt for this model.

When determining your pricing strategy, you’ve got almost endless options. Aside from a one-off charge known as a Lifetime Deal (LTD), however, most SaaS pricing models are based on either a subscription or on consumption.

For some subscription businesses, pricing per single unit with a consumption model simply isn’t realistic. In that case, customers could be charged for hundreds or thousands of units.

If AWS were to charge per singular API call, the price point would be so low that it would simply be too difficult for potential customers to comprehend the value and the expected cost.

In these situations, some companies opt for a subscription pricing model.

What Is a Subscription Model?

In a subscription-based pricing model, customers pay a flat rate every month to access your software.

This is a model that has been used by SaaS companies for a long time now, growing more than 300% in the last seven years.

Many SaaS businesses (like Pipedrive, shown below) that use subscription pricing will opt to implement a tiered subscription model. This makes a few different subscription options available, each with different features, and of course, different levels of pricing. 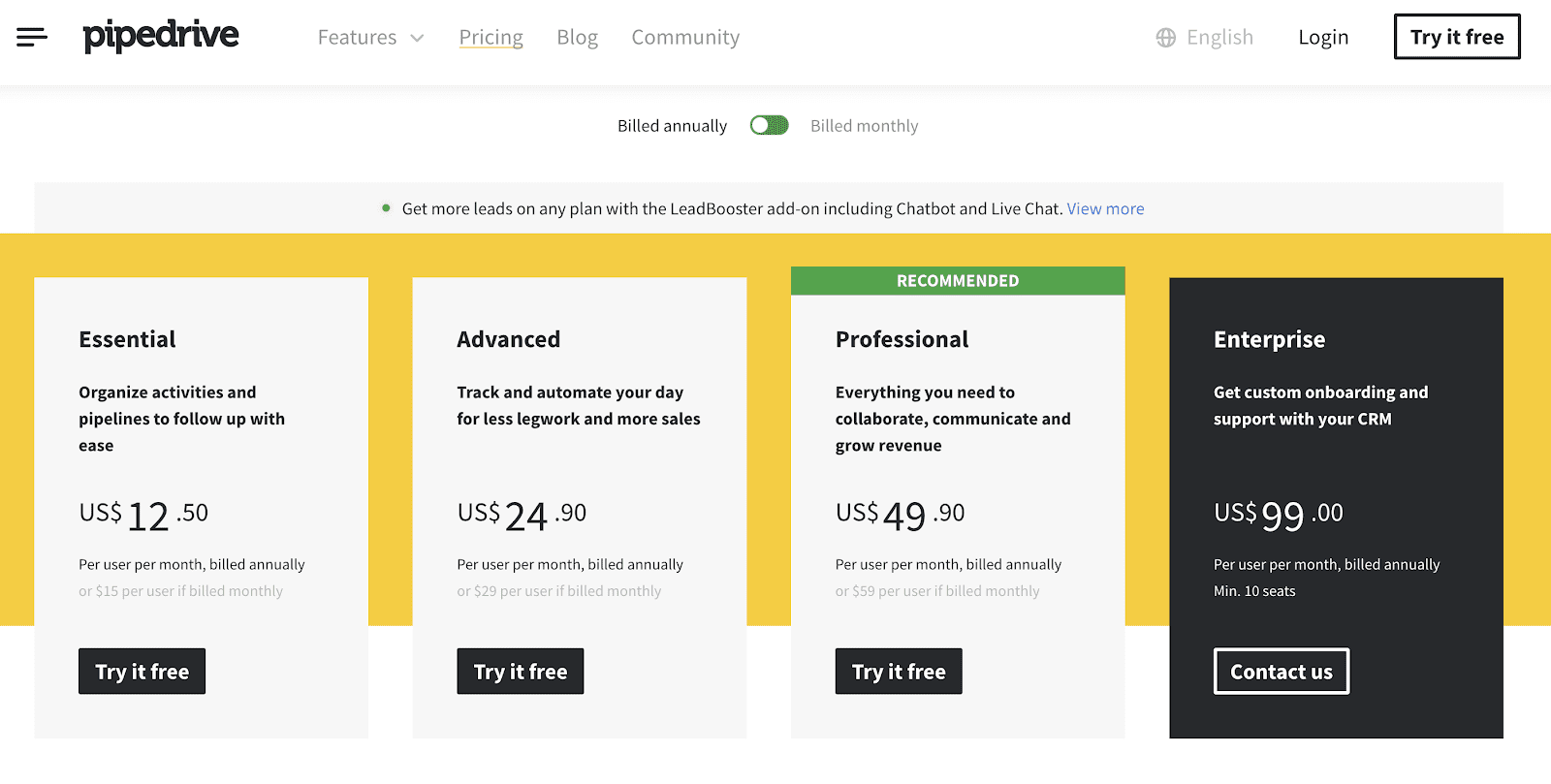 Using a tiered subscription model is advantageous because it gives your SaaS a lower entry point, with the opportunity to upsell in the future. Many companies even go as far as offering the most basic version of their software for free, known as the freemium pricing model.

Why a subscription model isn’t for everyone

One of the major benefits of this pricing model is that it allows both your company and your customers to budget easily, as the amount they pay is fixed each month.

Picture a company whose overheads increase as customer usage does — for example, a cloud storage platform. High-usage customers on a subscription plan can have a major negative impact on that kind of company’s bottom line.

Still, the subscription model doesn’t appear to be going anywhere any time soon. In fact, by 2023, it’s estimated that 75% of all companies will be offering their product or service on some form of subscription-based plan.

When is a flexible consumption model the right choice?

The major benefit of the consumption-based model is that to the customer, it seems fair. In this case, customers are paying for their actual usage, not simply their access to the platform, or for their potential usage.

It’s also particularly beneficial for companies whose outgoings increase in direct relation to customer usage rates, such as cloud storage.

In this scenario, the company is better able to manage its costs of operation, since they are covered by the ability to bill more accurately.

Who is consumption pricing best for?

Consumption-based billing is best for companies that can accurately and easily break down their service offering into small, digestible chunks.

In these examples, companies can easily determine a variable unit of usage.

Many companies have seen massive success using a consumption-based model. Take a cloud service company like Datadog, for example, which has been growing 88% year over year, thanks to a consumption pricing model.

By contrast, a SaaS such as a sales CRM platform might have a more difficult time quantifying the unit which can be charged for, since their product offering is so diverse.

There are, however, a number of drawbacks to the consumption-based pricing model. Let’s take a look at the four reasons the consumption model may not be the right choice for your company.

4 problems with the consumption-based pricing model

There are many upsides to consumption billing. However, before you make your pricing strategy choice, you’ll need to weigh the potential cons, too.

Here are four reasons why consumption-based pricing might be the wrong choice for your business.

The first, and perhaps most obvious downside of the consumption-based model is that it prevents you from being able to offer an annual pricing plan.

For subscription/SaaS companies, offering an annual plan is potentially one of the smartest pricing-related decisions you can make, as it locks customers into longer agreements, decreases your churn rates, and (through annual discounts) incentivizes conversion.

Usage-based plans allow your customer to stop using your product at any time, essentially reducing your billables to zero.

In addition, many SaaS buyers actually want to sign up for an annual plan, because it makes billing easier, and (as we said) usually leads to a discount.

By not offering one, you might well be losing out to other companies who are, especially considering a massive 54% of SaaS firms have an annual plan as part of their revenue mix.

2. Revenue is more difficult to predict

This is a huge challenge for SaaS companies of all sizes — whether you’re a startup needing to repay investments, or a growing company needing regular revenue to reinvest.

The problem with consumption-based pricing is this: you simply cannot predict what your monthly revenue is going to be, at least not very accurately.

Yes, you can make some assumptions based on historical usage data (which means you have to have been around long enough to have it).

However, there’s always the chance that a high-usage customer will experience a sudden drop in the need for your service, seeing your revenues for that month (or months!), plummet.

For many CFOs, revenue forecasting is done in monthly increments for the next financial year, looking at annual predictions after that.

Using the consumption-based model, this becomes near impossible.

As well as not being able to confidently report to your board with regard to revenue forecasts, it also spells out a whole host of other issues.

Namely, the inability to make any solid decisions on reinvestment.

If you don’t know how stable your revenue is going to be over the next 12 months, it makes it really difficult to allocate funds towards new product developments or to sign off on that flashy new marketing campaign.

If you are going to use this model, make sure you take into account the volatility of your cash flow and forecast moderately.

Another major challenge presented by the consumption-based model is that you’ll be billing your customers in arrears.

Whereas subscription-based customers are typically paying for the month upfront, usage-based customers can’t be charged until the end of the month, when you know what their total usage for the period looks like. 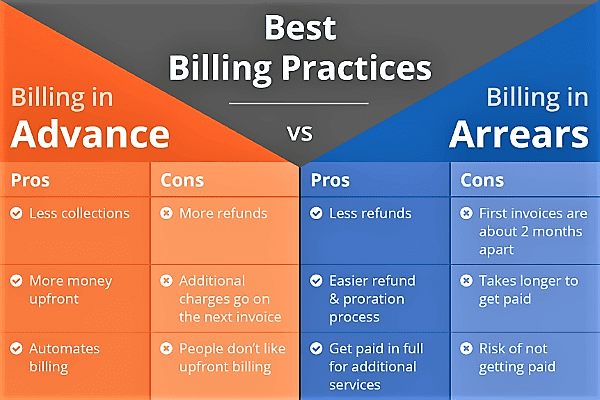 For larger, more established subscription companies with substantial cash flow, this might not be such an issue. For smaller companies, it can be a real nightmare.

We mentioned earlier that the kinds of SaaS companies that fit best with the consumption model are those whose overheads are tied directly to customer usage, such as in cloud computing, where the pay-as-you-go model makes sense.

Well, that means that if your customer usage goes up, then your bill goes up too. And most likely, your bill is going to be due before you’ve been able to gather all of the revenues from your own clients, meaning you’re shelling out before you’re raking it in.

Unless you’re well-funded, you may struggle to meet these obligations, putting pressure on those business relationships you’ve worked so hard to earn. It’s part of why  20% of startups fail as a result of choosing the wrong pricing strategy.

If you decide to embrace the consumption billing model, make sure you’re prepared to foot your bills in advance of receiving revenues.

4. Clients may find it difficult to budget

While you may find it difficult to make revenue forecasts when your customers’ usage varies, they might also struggle to budget accurately.

With a subscription-based model, your customers know exactly what they’ll be paying each month. Even if they are paying by seat, they’ll know how many users they’re signing on for each month.

With the consumption billing business model, that pretty much goes out the window. Your clients will need to compute this budget based on their expected usage, which will fluctuate.

Only 21% of businesses with more than 10 employees don’t budget regularly, so you can’t expect this won’t be considered.

They might decide to go with a competitor who offers a billing model that’s easier to budget for, maybe even an annual one.

The overall point is this: don’t go jumping into bed with a pricing model that seems right. Spend some time digging into what your competitors are doing. Also, make sure to interview your customers and ask about their needs.

A 1% improvement in pricing can mean an 11% spike in profits, so it’s worth investing the time.

Now that you know all the pros and cons of consumption-based pricing models, you just need to do your research and make a decision.

To recap, here are the four major dangers companies face when choosing a consumption-based billing model:

Whichever subscription pricing model you end up landing on, you’re going to need a robust revenue infrastructure to help support your growth. We can help — schedule a demo with Chargebee here.