Wall Street Journal, The Times, The Sydney Morning Herald are not just the landmarks of the news industry but institutions that millions of brains, on a day to day basis adhere to. For the first time since the 170 year old idea, without advertising revenue the newspapers look to have a blemished future.

In 1863, a French newspaper La Presse, first introduced advertising in newspapers. This allowed the newspapers to reduce its price and thereby extend their readership, and since then newspapers worldwide relied upon advertising as their main stream revenue. 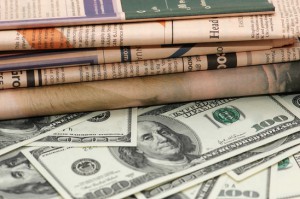 But in the growing digital age, with modern technologies, advertising agencies have reduced their dependencies on newspapers. The newspaper ad revenue, which once generated a whopping 50 billion dollars, has now plummeted down to just $22.3 billion, a drop of 55 percent in just TWO years! While newspapers were still reeling from the digitalization blow, another one arrived with Craigslist, taking away the classifieds revenue too.

As the digital version of newspapers came into existence, digital advertising revenue started to provide a lifeline. But the increase in digital revenue has just not been enough to barrage the falling print revenue. A survey by journalism.org reported that for every 1 dollar increase in digital revenue, a 7 dollar decrease occurs in the print revenue.

A sense of emergency led certain newspaper industries to look for a viable option. The print houses decided to capture upon a rising trend, the digital subscription model. Suddenly, a seemingly miraculous word ‘Paywall‘ arose,a “pay to access” model. Since its inception in 2007, paywall has seen a lot of different versions come up, but so far the story has not been so convincing.

So why isn’t the paywall cashing in?

Hard paywall is a model where the content is accessible only to paid subscribers. As the content is not freely out in the open, both search and organic traffic numbers slowly dwindle. Search engines only index pages that are free, less pages it indexes, lesser the traffic generated. This model requires a very strong loyalty base who would be willing to shell out money for its content, and so far only Wall Street Journal has been able to sustain this model, The Times while implementing a similar model has seen a 90% reduction in site visits. The success of hard paywall may be very limited as the model reduces any ability to scale up.

Slowly, the hard models paved way for a newer version nicknamed ‘soft’ paywall. The sheer structure of the hard paywall model restricts any positive growth. To overcome this there are a lot of experiments being carried out by websites like providing more free content. A ‘soft’ paywall, to waive off paywall on high traffic occasions, like The Times’s free access on The Queen’s jubilee. Another version is the metered paywall implemented by the New York Times, which allows the user access to a limited number of articles on a per month or per day basis. There are other versions of this including the freemium model by the Sydney Morning Herald which allows access to news reports but not the analysis. Even these models have failed to get the readers to open their wallets. The conversion rate from free registered users to paid customers is as low as just 1-10%.

To overcome these deficiencies, more and more content will be offered for “free” to consumers as distribution platforms like Google News continue to proliferate. Inevitably, this will erode the pay-model outlets, of readership.

Does anyone understand paywall at all?

Quick question: what were the questions asked in the paywall 101 class? Quite surprisingly, the only question asked is “Will they pay?”. Just the amount of hacks available to go past the paywall will supplement this fact. Some very simple methods of switching browsers or going incognito or some simple java script at the browser end is enabling unlimited access to any reader.

At present there are numerous channels to access news articles, and voluntarily or involuntarily newspapers are letting free content exist in certain channels to gather more traffic.

A question does pop up, what exactly are the news readers paying up for?.

Another big impact of the paywall is that they are enabling their primary competitors to eat up the traffic. The introduction of paywalls for The Times and The Sunday Times content in 2010 has led to a whopping 90% drop in traffic. Similarly the number of monthly site visits of The Sun in August has gone down by 60% post paywall. Meanwhile its main competitor The Mirror, reported a 19.65% leap in average daily browsers in August according to the latest Audit Bureau of Circulations report.

A similar case in Australia, where the two leading media houses, News Corp and Fairfax have gone behind a paywall. Capitalizing on this, The Guardian has now launched its Australian digital edition by promising readers a fresh perspective on Australian and world news. While the loyal readers of the Australian newspapers might not be affected by this move, will the day to day news junkies pay up? No! They’ll simply click over to The Guardian, a website that fits nicely into to the same market niche. That seems exactly what’s happening, while both Fairfax and News corp have failed to stop their declining valuation, The Guardian has now seen a 30% increase in monthly site visits.

The question that comes up is, how long will the big boys stand by and watch while a new player from another continent takes away their loyal readers?

The idea of “paying to stay informed” is not something everyone would be ready to “buy” into, but soft paywalls have been able to help publishers retain some of their subscribers. Additional metrics such as CMRR and ARPU should supplement the number of subscriptions for a successful subscription service. Experiments such as price reduction and increase in free content seem to show improvement, but whether they are fail proof or not, is yet to be seen.

The paywall experiment has not been cheap either, only national level media houses were able to shell out large sums of money. What about the relatively smaller media houses?

A subscription-based model may be an alternate way of getting subscribers back on, while free access to the digital version continues, the paid users may be entitled to multimedia and other premium content available across multiple platforms. The Guardian’s model of open source delivers the promise of free media, while paid subscribers have premium content delivered. Using this type of model, a newspaper industry can easily embrace the subscription model. I mean, just to be fair, isn’t the newspaper industry where subscriptions really started?

The sources cited in this blog are from similarweb, mumbrella and the guardian.

You can also discuss this on Hacker News here.