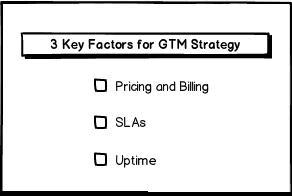 Are you feeling pretty confident about the go-to-market strategy for your budding subscription business? We’re not saying it’s more difficult than you think, but the evidence certainly points in that direction.

According to SAAS business analyst Yvonne Muench, the technical aspects of building software is generally much easier than developing scalable systems that can weather the transition into the market. If you’re confident that your company’s product can stand up to the demands of your market, but concerned about the demands of the shift, we’ve outlined the basics of surviving the biggest challenges your subscription business will face:

The last thing an entrepreneur wants to face is a bottle neck while they’re trying to take their subscription business into the market place. You need a payment system that isn’t just able to invoice and charge clients on a recurring basis, that offers all the security and reliability your clients deserve. If you’re planning on growing larger than just a handful of clients, it’s important to scale ahead of time, before you’re trying to rebuild the car you’re already driving.

According to technology blogger Phil Wainwright, developing scalable systems is among the largest challenges for SAAS companies. “Billing, settlement and subscriber management solutions…have been ignored for so long.” Wainwright concludes in his analysis of issues facing the industry that automation is key. While young companies can operate by manually invoicing their first dozen clients, growing rapidly and acquiring customers following an influx of cash from venture capitalists requires established processes that only come with automation. Manual processing will only lead to missed revenue and customer dissatisfaction, while automation cuts administrative costs and allows companies to focus their personnel on up-selling more effectively.

Another aspect of your Saas that’s essential to define in advance is SLAs, an acronym for service-level agreement. It’s critical to provide potential and existing clients with metrics-based contracts to ensure they’re able to quickly justify their utilization of your subscription business. The following numbers are basics that usually appear in SLAs:

Here is an article from Crystal Bedell which may be of interest to you.

A metric that’s commonly defined in SLAs, uptime is a simple measure of the percentage of the time you’re promising the service will be available. Not only is it critical to define as a differentiating factor, it’s crucial to hire and train personnel with the purpose of upholding these goals.

A lack of scalable systems has been cited as a top reasons why start-ups fail to raise capital. It’s difficult to define processes during a period of rapid growth, which is why developing automation and SLAs that can stand up to the demands of a competitive market is just as critical as ensuring your subscription business has all the bugs worked out before you begin to sell accounts.