Sometimes it’s a global pandemic. Sometimes it’s a financial crisis. Sometimes it’s a disruptive technology that turns your business model on its head. As a business, you cannot escape change. Every business needs to adapt to disruptive change even as they grow with new products, new geographies, and revenue models. Then there’s change coming from within as businesses scale processes, teams, and workflows through different stages of growth. Change is continuous. Change is inevitable and yes sometimes it’s bloody hard!

But then you have the ones who see change differently. The round pegs in square holes, as Steve Jobs put it. The ones who challenge the status quo and see change as an opportunity to make a difference and transform lives. So they don’t live through change. They champion it. Where most see a constraint, they see change throw open infinite new opportunities- to expand, capture, and leverage.

The Champions of Change series is Chargebee’s way of celebrating these change makers. Not just the sheer genius of a single person behind life-changing innovations that shape the world we live in today but also the brains behind amazing business transformations, the clever pivots, the tweakers, and the oddball minor geniuses. Not to forget your internal change champions- the software engineer who added that single feature that completely transformed the fortunes of the product, the VP who tirelessly led a shift to a new but a more resilient revenue model or the customer success executive whose empathy and bias of action earned you lifelong loyal customers. Because great businesses are never built by a single person, there’s always a great team behind it. In this Champion of Change series, we will bring you inspiring stories of individual and collective perseverance to build something that creates an impact, business transformations that brought companies back from the brink, companies that developed agility that outlasts the pandemic and stories about everyday heroes who led internal transformations that went on to create enduring organizations.

Champions of change have the ability to see around corners and an instinct about consumer wants that are yet to be formed. When Steve Jobs took his original Macintosh team on its first retreat, one of his team members asked if they should do some market research to see what the customer wanted. Steve Jobs dismissed the idea saying “Our job is to figure out what they’re going to want before they do. People don’t know what they want until you show it to them. Our task is to read things that are not yet on the page.”

Jeff Bezos anticipated the potential of e-commerce when others thought the internet was best used for research.“This is Day 1 for the Internet and, if we execute well, for Amazon.com. Today, online commerce saves customers money and precious time. Tomorrow, through personalization, online commerce will accelerate the very process of discovery,” Bezos said in his annual letter to shareholders in 1997. The idea for Amazon came from a statement he came across when he was working at a hedge fund that ‘web usage was increasing by 2300% a year’. After making a list of 20 different products to sell online, he picked books. Why you ask? Bezos says he chose books because there were more items than any other category. Music came in second. While there were 3 million active books in different languages, there were about 200,000 CDs active back in 1997. He captured the attention of consumers by creating an online business the likes of which did not exist.“Attention is a scarce commodity and one of the ways you can capture the consumer mindshare is by doing something new and innovative that actually has real value for the customer and that’s a hard thing to do. But if you do that, you will get a huge word-of-mouth fan out and that’s what will drive and accelerate businesses.”

Change often needs catalysts that come from within the organization or external factors that come together to provide an ecosystem that enables the change. For instance, Samuel Crompton invented the spinning mule in 1779, which was the first attempt at mechanizing textile manufacturing. Richard Roberts improvised on it by creating an automatic spinning wheel in 1824. But the catalyst in its adoption came a few years later when there was a strike by the cotton mill workers. The mill owners, who were looking to replace those workers, quickly upgraded to the automatic spinning mule and the textile industry has never looked back since.

Similarly, the  Internet has not only redefined how we search and share information with each other but has also formed the bedrock on which many billion dollar businesses have been built on. It continues to shape the way we work, learn, and live. But when it first made its presence felt in August 1991, no one had an inkling on the life-altering difference it was going to make in our lives. What made the Web dominant was the fact that Berners Lee gave it away free for millions of entrepreneurs and innovators to build their products leveraging it.

We are at similar crossroads now with the global pandemic hastening digital adoption, transforming business models, and changing the competitive landscape of many industries. Even before the world began grappling with the global crisis, 92% of company leaders surveyed by McKinsey thought that their business model would not remain viable at the rates of digitization at that time. The pandemic ensured that the planned digital transformation happened in weeks rather than years. For instance one of Slack’s customers,  a large US-based grocery chain, which had about 1200 of its employees on the messaging platform before the lockdown, requested the company to roll out a plan for 100,000 employees in 72 hours. The last time Slack had ramped  up at that scale for a customer, it had taken 15 months.“The fundamental reality is that the accelerating speed of digital means that we are increasingly living in a winner-take-all world,” says Kate Smaje, a senior partner and global co-leader of Mckinsey Digital.“But simply going faster isn’t the answer. Rather, winning companies are investing in the tech, data, processes, and people to enable speed through better decisions and faster course corrections based on what they learn.”

It is one thing to adapt to ensure your survival when external forces come together to drive change. It’s a whole different ball game to let go of old habits and drive change from within an organization. Tommi Forsström, VP at Teachable says there is nothing like a crisis to ignite change.“Every change needs impetus. If there is no pressure to change, there is no change. Sometimes you need  competition or market risks or even a disastrous quarter; something that rings a bell that you are facing an existential crisis, to showcase why change is critical.” He says companies find it easier to live with the status quo rather than investing in a big change or transformation, which only ends up costing them in the long run.“You never run into an iceberg. It’s the little things that chip away from your business. It’s death by a thousand paper cuts. It starts off with the bugs and glitches that take a bit more time and are more expensive to fix. As you scale every little mistake starts to cost you and impact your long-term growth.”

As you scale, you soon realize what got you to Point A will not get you to Point B. You need to get rid of the makeshift systems you put together and invest in the right people, process, and infrastructure that will allow you to adapt and scale.

Indeed, you can no longer win the race with a first mover advantage, or larger market share. Companies that thrive are the ones who are quick to read and act on the signals of change. They are not afraid to experiment with the products or services, pricing, process, and heck even business models! They are constantly pushing the boundaries to reinvent themselves to achieve what many thought was impossible. We at Chargebee want to celebrate each one of them. So as Steve Jobs said “Here’s to the crazy ones. The misfits. The rebels. The troublemakers… The ones who see things differently…. You can quote them, disagree with them, glorify or vilify them. About the only thing you can’t do is ignore them. Because they change things. They push the human race forward. And while some may see them as the crazy ones, we see genius.” 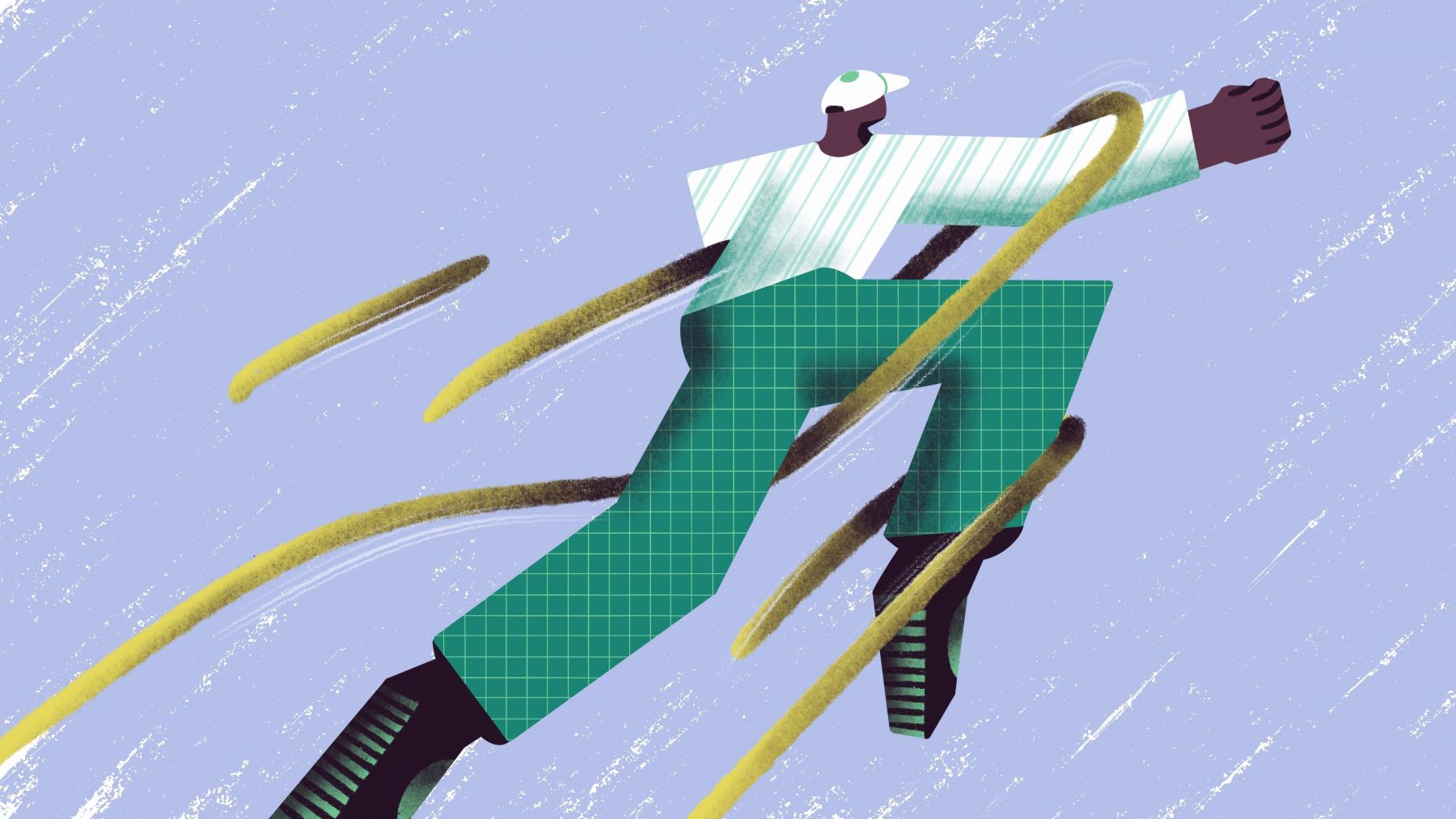 Turning a crisis into a win: Lessons from companies who beat the odds
Related Read | ~10 min 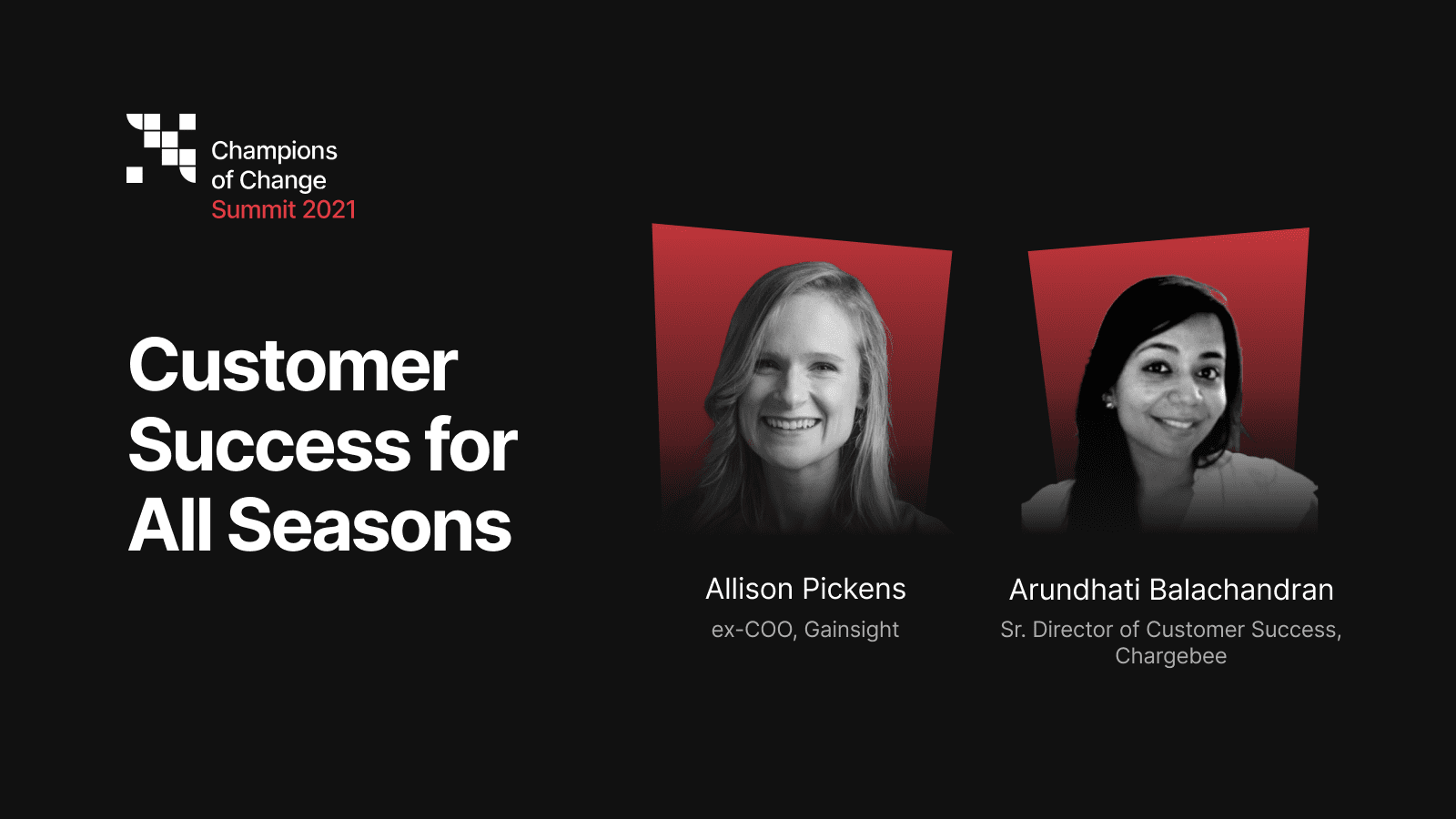 Winning at Customer Success at All Levels with Allison Pickens