The doorbell rings. You find a salesman at your doorstep, holding this huge sealed carton with numerous colorful labels and CTA stickers on it. From the labels, you’re quick to realize that it’s a product that you’ve been looking for, and your interest is piqued.

And then the salesman drops the bomb. You aren’t allowed to open the box, until you buy the product.

A – Go ahead, pay him what he asks for, and get that sealed carton

B – Turn down the offer, watch him leave, and go about minding your work?

Now replace that carton with your product’s website. Do you see what I’m getting at?

A free trial is indispensable in SMB SaaS. “Try before you buy” has become the de facto approach of buying SaaS products. So much so, that if you think that it is not applicable to your business, you must have a very compelling reason why you’ll be able to sell your product without letting your customers try it out before they purchase your product.

The baseline is this: Unless people like your product, they wouldn’t want to share their personal details with you. And that absolutely makes sense.

(One exception could be the enterprise software products, where offering a demo will make more sense than offering a free trial. This one deserves a post of its own, and hence we shall stick to the main topic for now.)

Does this mean that if you’re offering a free trial, you should ask for the user’s credit card information during sign-up? How will that affect the results of the free trial? Card or no card – which way to go?

Let’s take a look at both sides of the coin, learn what their perks and pitfalls are, when to use them, and how to nail them right.

Who have taken this route?

What makes it work?

If you ask for a credit card number during a free trial, two outcomes are bound to happen:

Granted, the sign-up rate will be lower compared to this model’s counterpart, but the trial-to-paid conversion will be more. The logic is quite simple: only those with a serious intent, and who can afford your product would go ahead and type in their card number. The rest would simply bounce off.

Here, you’re allowing the users to qualify themselves while signing up for your service, which also takes a huge load off your sales team’s shoulders – a qualified opt-in.

A considerable number of startup founders have picked this strategy, and have their own set of justifications to back the choice:

Who is this suitable for?

A company that’s hitting the growth pedal, is looking for fewer sign-ups and more revenue per user (RPU)

If that’s what you want, then ask for the credit card details during the trial sign-up process.

So you have a less number of sign-ups, where most them will definitely be qualified, thus bringing you more revenue.

Initially, Statuspage.io offered its customers a free tier and a $49/mo premier tier only. And in over two years, they’ve raised their prices twice (with the highest tier about 8x of their initial price), and have raised their ARPU from $49 to $116. What’s more surprising? It didn’t negatively affect their conversion at all.

Who have taken this route?

What makes it work?

If there’s one obvious benefit of having a sign-up process which doesn’t require credit card information, it’s minimal or no friction, which in turn will shoot up the sign-up rate.

As per one of Totango’s reports, companies which didn’t require credit card information showed a higher end-to-end conversion percentage when compared to those that ask for the information for the free trial.

So what else was the underlying reason behind this data?

“Trust”, says Lincoln Murphy. According to him, by setting up the credit card barrier, you’re only adding to the distractions, and affecting the trust factor. He also warns that in some cases the trial-to-paid conversions in a free trial with credit card method might be accidental, where the customer had no idea that their card was charged. Such situations will inevitably lead to them sending you emails requesting refunds.

If anything has changed in the last few years, it’s that people have become LESS trusting… not more. Less willing to whip out the credit card to TRY something. Why? Because 100% free options abound. So they don’t need to. Couple that with the fact that people are busier and more distracted, and asking for a Credit Card up front (what I call putting up a CC-Wall) becomes yet another distraction rather than something that helps them move forward to becoming your customer. Distractions + Lack of Trust = Fail.
Lincoln Murphy

Who is this suitable for?

Here you have two scenarios:

1. A company that’s just coming out with the beta version of its product

Typical characteristics of such a product will be that it caters to a niche set of audience, and hasn’t found its product-market fit yet. So the primary focus should be acquiring paying/non-paying customers who can evaluate the product, and give you honest feedback.

If your intent is to get more people to try out your product, then the best option is to make your sign-up process as frictionless as possible: no credit card details required, no strings attached.

For starters, you can have offer the visitors two options (with two different CTA buttons), where one asks for card details and one doesn’t, and A/B test the sign-up conversion percentage for yourself.

To give you a real-world example, let’s take MailChimp (which doesn’t ask for card details in the free trial) and AWeber (which has a $1 sign-up process).

A user might end up spending more with MailChimp at a later stage, but will initially go with MailChimp, because they face no friction when they want to try out the product. The user’s logic is simple: When I don’t even know whether I want to buy the product or not, why would I pay a dollar for it?

If you want your product in more people’s hands, then it’s a no-brainer. Just go for the frictionless, no-credit-card-required sign-up process.

2. A company that’s hitting the growth pedal, is looking for more sign-ups and less revenue per user (RPU)

In this case, you remove credit card requirements, get more sign-ups, qualify them better, try to win more of them, and thus earn more.

This method has its own set of pitfalls. The sales team has to meticulously qualify the leads. If you don’t qualify the trial users well, you’ll end up with a leaky bucket; you’ll be spending quality time in conversations, but with the wrong guys.

Your sales team has to be well-trained on how to qualify leads and how to spend more time with those qualified leads.

This way, customers qualify themselves and you don’t have to spend your sales effort to qualify them. Use your product to sell itself and qualify the customers. And here, because the users have entered the card details, they’ll automatically be moved to the paid plans at the end of the extended trial period – a default opt-in instead of a default opt-out.

So it becomes all the more important for you to get them engaged, and to get them realize the value of your product as soon as possible. Determine the Common Conversion Activities (CCAs) of your most active customers, motivate your trial users to perform those activities, and design your app to support the same. In fact, this process helped in boosting our trial-to-paid conversion rate from 8% to 15%.

Wrapping things up (with a bonus tip)

A special treat for the numbers people! Venture capitalist Christopher Janz has given a pretty neat model to check which strategy works for your business. Here’s the sheet.

Basically, you just have to replace the blue values with your company’s values, and watch the magic happen. Head here to read more on that(you’re welcome!).

There you have it. Set your priorities straight, pick the free trial strategy that best fits your situation, ensure that you have everything set to tackle the hiccups, and most importantly, get your customers to truly experience the value of your offering.

To summarize, here’s a presentation covering all the points discussed above: 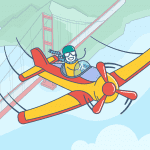 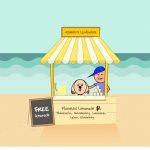 The underrated magic of startup pivots