Revenue Recognition for Subscription businesses can be quite tiresome. GAAP standards define the general rules but it takes effort to determine the applicability of these rules for each of the various scenarios that could apply to a subscription business.

Let’s assume that John is a customer who has signed up with Help!. John opted for the annual Pro Plan priced at $12000 per annum starting from the beginning of January. The revenue recognition in this case is fairly straightforward.

From a revenue recognition perspective, which is dependent on the billing and the services rendered, the sequence of events leading to revenue recognized for April will be as below:

If John decides to accommodate 10 additional agents on May 1st, at the price of $10 per agent, over the 100 agents offered under the Enterprise Plan for the subsequent months, then this qualifies as a quantity-based upgrade.

In this case, no Credit Note will be created and an invoice will be generated for the additional 10 agents.

In such a scenario, the revenue recognized in May and subsequent months would be $1100 ($1000 + ($10*10 agents)) and the deferred revenue from May will be reduced to $7700 including the recognized revenue along with the price for 10 agents for the subsequent 8 months.

When John downgrades from, say, the Pro Plan of $12000 to the Growth Plan of $6000, on the 15th of April, the revenue recognition for that month will look something like this.

When John reduces the 10 agents in his Pro plan down to 9 agents,  that’s a quantity-based downgrade and a credit note is raised accordingly.

Here, the revenue recognized in April and subsequent months would be $900 [$1000 - ($10*10 agents)] and the deferred revenue from May will be reduced to $7000 when the $1000 in recognized revenue along with $800 in the decrease in agents is removed from April’s deferred revenue. 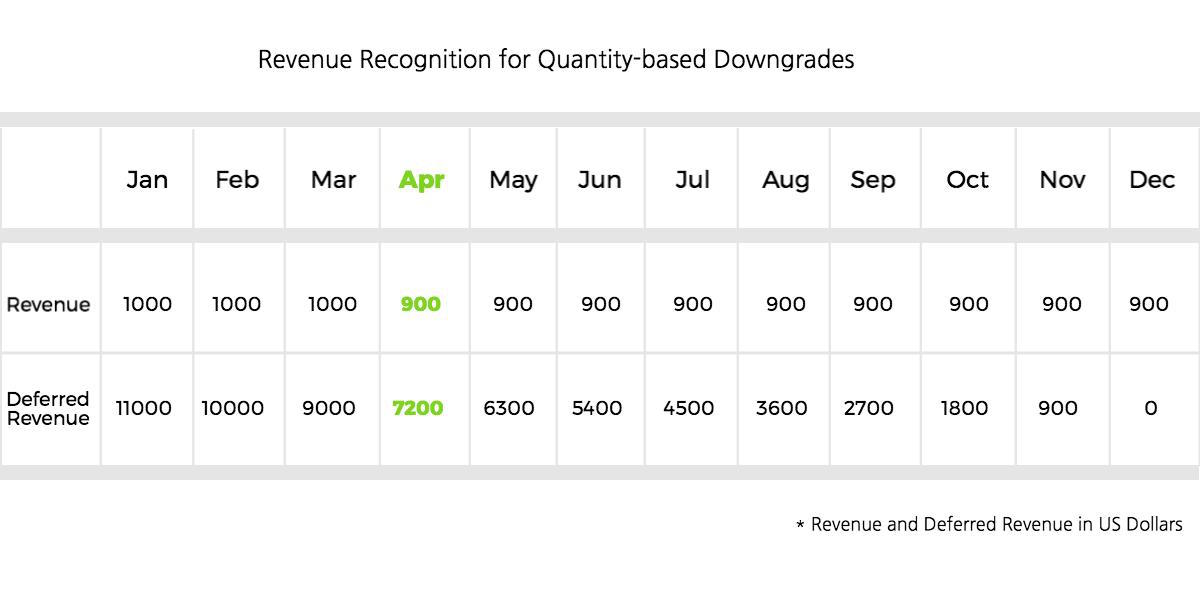 6. Revenue Recognition for Cancellation with Refund

John pays $12000 upfront to Help! following the annual contract of 12 months. However, he decides to request for cancellation in April. There are two possible scenarios that the customer can encounter,  depending on how Help! would like to enforce its contractual rights.

In the case of cancellation with refund, John cancels the services from Help! in the start of April with refund. Help! recognizes the revenue till March. Help! also creates a credit note for $9000 and refunds the amount to substantiate the cancellation. 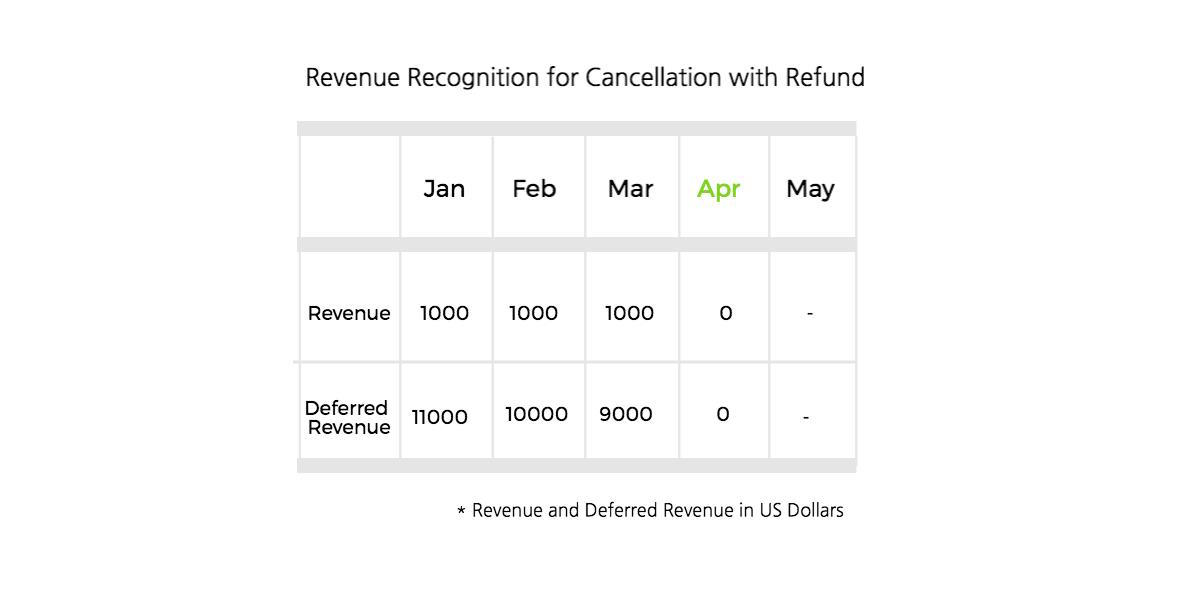 7. Revenue Recognition for Cancellation without Refund

In the case of cancellation without refund, John cancels the services from Help! in the beginning of April, but contractually, is not entitled to a complete or partial refund. Help! can then recognize the balance amount over the subsequent months as deferred revenue. There is no credit note created in this case.

8. Revenue Recognition for Shift in Monthly to Annual Plan Cycle

John has signed up with Help! on a monthly plan of $1000/month. In such a scenario, the revenue from each month can be recognized in the same month.

But if John decides to shift the plan cycle from a monthly plan to annual Pro Plan at $12000/year, at the beginning of April, then the deferred revenue account will need to hold the prorated amount of $8000 starting from April.

9. Revenue Recognition for Shift in Annual to Monthly Plan Cycle

But if John decides to shift the plan cycle from a annual Pro plan to monthly plan at $1000/month, in the beginning of April, then Help! issues a credit note of $8000 for refund in April and thereafter, the revenue is recognized in the respective months.

As far as addons and metered billing are concerned, the revenue can be recognized directly, , in the same month.

Say, John includes an addon - Setup Fee, for the month of January, priced at $150, along with a metered-billing component of Social Support priced at $300 per month. The revenue for addons as well as metered billing will be recognized in the respective months.

It is important to understand that the treatment of addons and metered amount is different. The overages incurred in the metered billing will be recognized in the month in which it is accrued. As for addons, the amount is recognized on the basis of when it is billed. 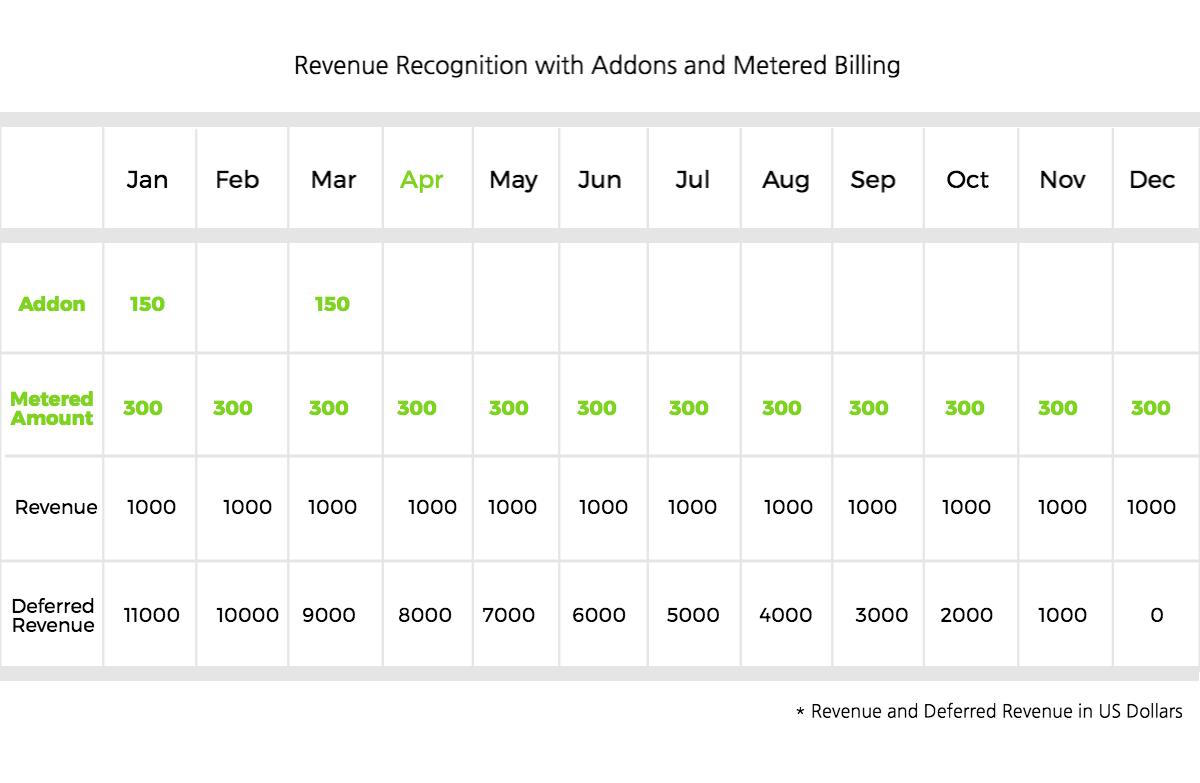 According to GAAP, revenues from a sale can be recognized as long as the services are rendered, and there is reasonable assurance that money can be collected, even when the customer may fail to pay immediately. However, if a business fails to collect the payments, the business has to report a bad debt under an Expense Account, to offset the revenue reported during the sale.

Subsequently, if the amount is deemed to be uncollectible, the business can partially or completely write off the account.

Say, John paid Help! with a cheque of $12000, in the month of January. Help! recognizes a revenue of $1000 every month and the remaining is retained in the deferred revenue account. However, in the month of April, the cheque has bounced off, and Help! fails to recognize the revenue in that month. This becomes a bad debt and would need to be reported immediately.

This continues through the duration of the contract from April to December. Then the business can write off the revenues with respect to future services. However, this does not impact the past services. This can be done in two ways: partial write off and full write off, as below. 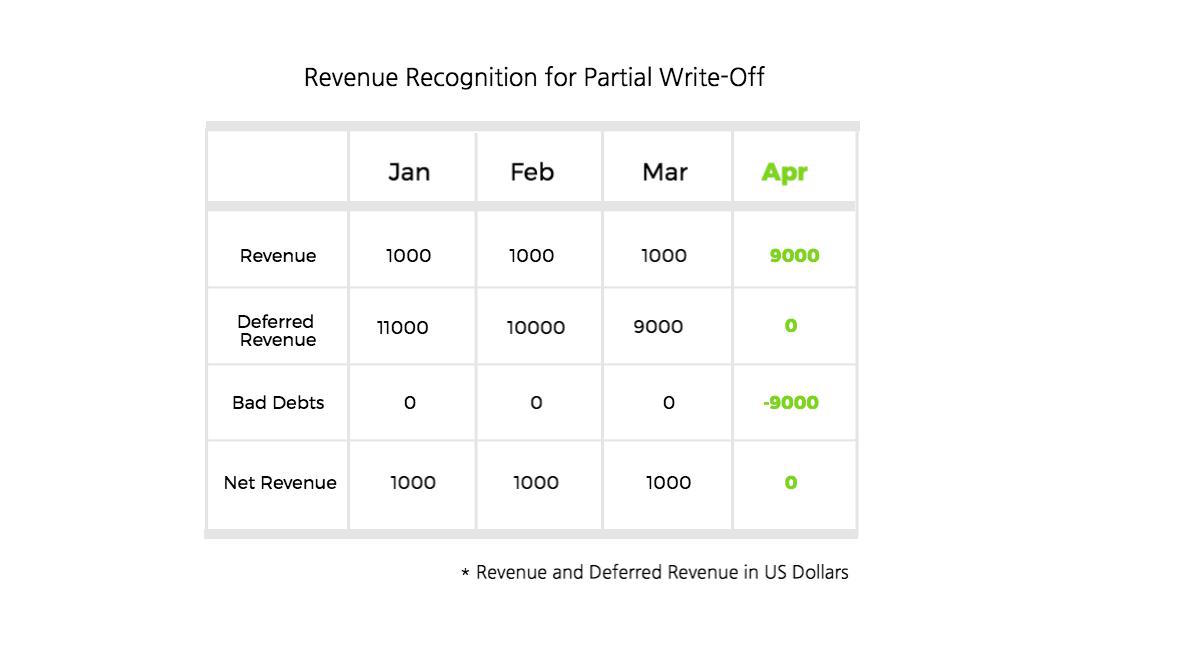 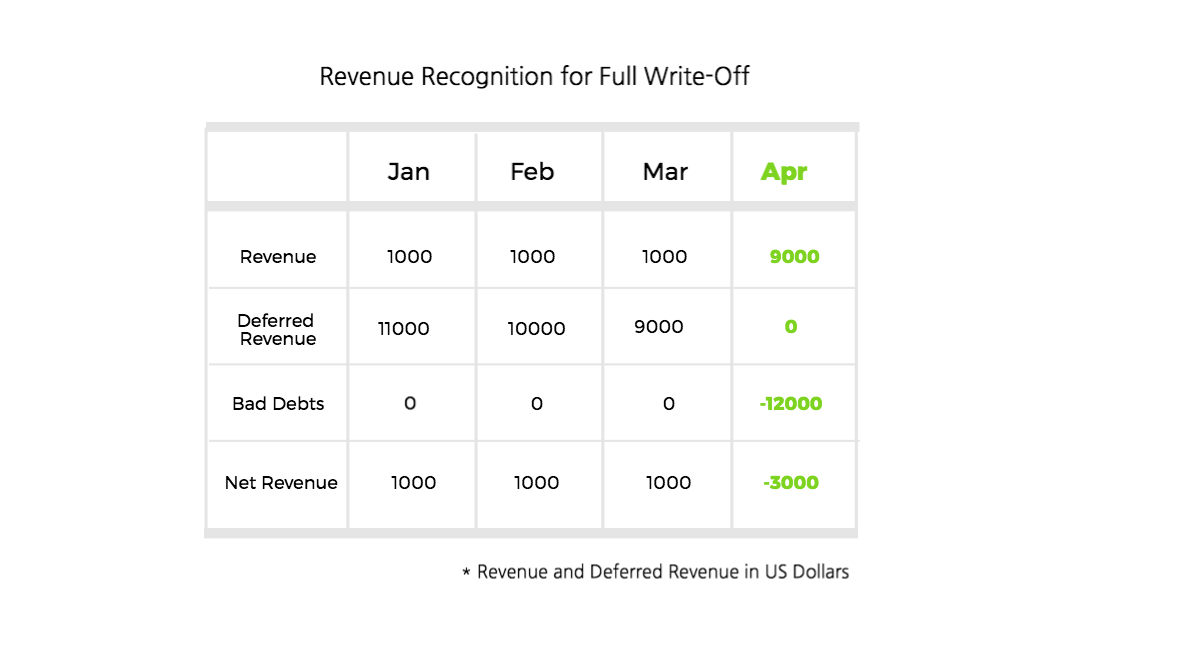 Subscribe to receive new chapters as soon as they're published