What is Accrued Revenue?

Accrued revenue is revenue that is recognized but is not yet realized. In other words, it is the revenue earned/recognized by a business for which the invoice is yet to be billed to the customer. It is also known as unbilled revenue.

Revenue recognition principle: The revenue should be recognized in the accounting period when it is realized and is earned. Revenue is earned only after delivering the product or service.

Matching principle: Expenses should be recorded in the same accounting period as revenue that they helped generate. Simply put, expenses are 'matched' with revenue.

When does Accrued Revenue Occur?

Accrued revenue must be booked when there is a mismatch between the time of payment and delivery related goods/services.

This can happen in cases such as:

From the lens of SaaS, revenue is often accrued in cases of:

For example, ABC marketing agency signs up for a marketing automation software, 'Yoohoo', that's billed quarterly at $600 for a three-user package. Twenty days into the subscription period, the agency realizes that they need two more users to access the software. Furthermore, the agency also requested Yoohoo to provide an exclusive training session.

The cost of adding two more users and a training session is not billed immediately to the ABC agency but is marked as Yoohoo's accrued revenue for that month. This revenue will be converted to accounts receivable during the renewal in the next quarter.

When a company receives upfront payment from a customer before the product/service has been delivered; it is considered as deferred revenue. In short, Deferred revenue is recognized after cash is received.

Accrued Revenue, on the other hand, is recognized before cash is received.

Let's look at the key differences between Accrued Revenue and Deferred Revenue:

How is Accrued Revenue Recorded in Journal Entries?

On the financial statements, accrued revenue is reported as an adjusting journal entry under current assets on the balance sheet and as earned revenue on the income statement of a company.

When the payment is made, it is recorded as an adjusting entry to the asset account for accrued revenue. This only affects the balance sheet and not the income statement.

Let’s understand this with an example. Pied Piper IT Services agrees to build a flight navigation software for XYZ airlines in 12 months for a sum of $120,000. According to the contract, Pied Piper is expected to deliver the first milestone of the software in 6 months which is valued at $60,000. A second milestone will be delivered at the end of another 6 months, indicating the end of the contract.

The contract is such that it only allows for billing at the end of the project for $120,000. Hence Pied Piper must create the accrued revenue journal entry to record reaching the first milestone (6th month): 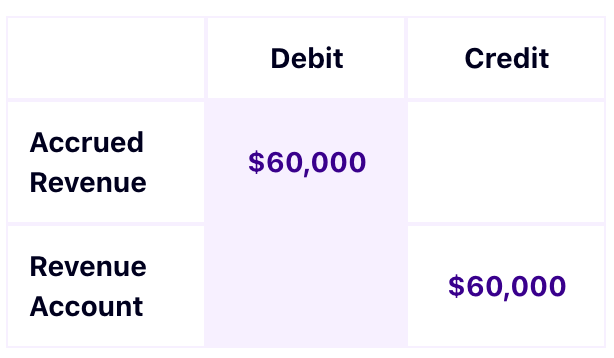 After Pied Piper completes the second milestone and bills the client for $120,000, Pied Piper must record the following journal entry to reverse the initial accrual, and thereafter the second entry for the $120,000 invoice. 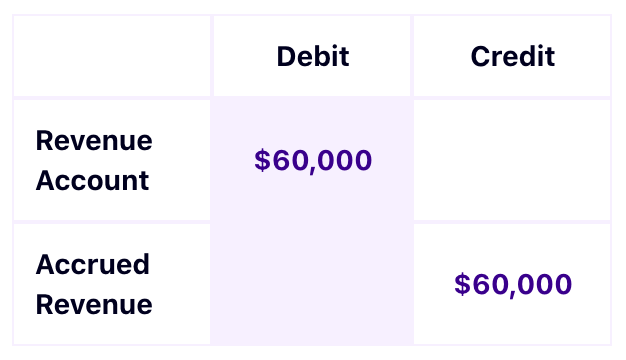 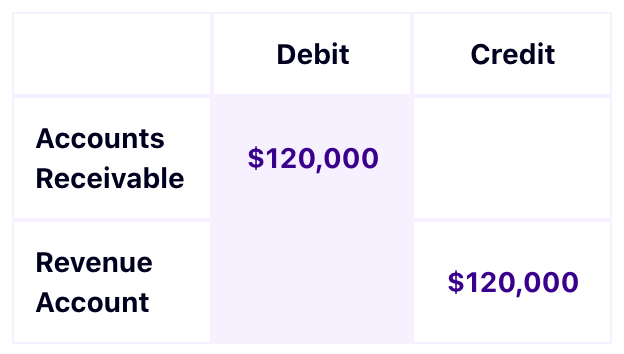 Debit balances related to accrued revenue are recorded on the balance sheet, while the revenue change appears in the income statement.

Is Accrued Revenue an Asset?

Once a company bills the customer for the goods provided or service rendered, Accrued Revenue is treated as an Account Receivable until the customer pays the bill. Hence it is a current asset on the balance sheet.

However, a high Accrued Revenue signifies that the business is not getting payments for its services and can be alarming from a cash-flow perspective.

Why is Accrued Revenue Important?

Recording accrued revenue as a part of accrual accounting can help a business be agile by anticipating expenses and revenues in real-time. It can also help monitor the profitability of the business and identify potential problems well in advance.

SaaS businesses sell pre-paid subscriptions with services that are rendered over time and hence require the use of the accrual basis of accounting. Revenue recognition in SaaS is done when the service is rendered and the revenue is ‘earned’. Not using accrued revenue in SaaS would lead to revenue recognition at longer intervals, since revenues would only be recognized when invoices are issued. This would not capture the true health of the business.

Accrued revenue serves to demonstrate how the business is doing in the long run. It also helps in understanding how sales are contributing to profitability and long-term growth.

The Ultimate Guide to Revenue Operations
See how you can drive efficiency into your RevOps with our extensive guide.
Download Guide

More reads about the best practices of SaaS Accounting and Revenue Recognition: