In the 1970s, Daniel Kahneman assembled what can only be called an all-star team, by any measure.

A set of notable teachers including Amos Tversky, a mathematical psychologist and a frequent collaborator, some of his own students, and Seymore Fox, the dean of Hebrew University’s School of Education and an expert in curriculum development.

Together, they were crafting curriculum to teach judgment and decision making in high schools for the Israeli Ministry of Education.

For a year they met every Friday afternoon, building a detailed outline of the syllabus, a few chapters, and a few sample lessons.

Progress was good — when Kahneman asked each member of the team to take a shot at estimating how long it would take them to see the curriculum through, answers were narrowly centered around two years.

His estimation exercise took an unexpected turn, though, when he paused to stop thinking about all the progress they’d made so far. The team was thinking of the information they had right in front of them. The ease with which they’d gotten chapters up. Their experience on past projects. Their estimates said so. But, what of the information they didn’t have right in front of them? What of the unknown unknowns?

“I turned to Seymour, our curriculum expert, and asked whether he could think of other teams similar to ours that had developed a curriculum from scratch,” he writes, “and it turned out that he was familiar with the details of several. I asked him to think of these teams when they were at the same point in the process as we were. How much longer did it take them to finish their textbook projects?”

Fox’s answers brought the optimism in the room down a few notches. It took similar teams with similar projects seven years longer, on average.

Only 60% of the teams actually finished.

“When you compare our skills and resources to those of the other groups, how good are we? How would you rank us in comparison with these teams?” Kahneman asked, ignoring the pall of gloom that had suddenly fallen over the room.

Fox didn’t hesitate before he said, “We’re below average, but not by much.”

The comparison came as a complete surprise to everyone, Kahneman and Fox included, who had pitched similarly optimistic estimates in light of the progress they had made. None of them had made the connection between their own forecast of progress and the history of teams like theirs.

The curriculum was finally completed eight years later. But it was never used. The enthusiasm that Kahneman was initially met with (in the Ministry of Education), was gone.

Reminiscing about the experience for his book Thinking Fast And Slow, Kahneman writes, “This embarrassing episode remains one of the most instructive experiences of my professional life…I had stumbled onto a distinction between two profoundly different approaches to forecasting, which Amos and I later labeled the inside view and the outside view.”

Credit card processing: Blind spots and the outside view

Millions of credit cards are processed every day.

Online transaction volumes are over 9 billion in the United States alone.

Yet, online credit card processing remains something of a black box to customers and merchants alike.

This is a problem because, like Kahneman and his team relying on the inside view (or information that was right in front of them), a lack of information of what’s actually going on out there can lead to a dangerous blind spot.

Credit card processing is one of those tricky places in online business where a blind spot can cost you.

This is an age of regulatory uncertainty. With big political upheavals (think Brexit and the Trump administration) and fraud rising like the tide, there is a tacit understanding among financial services that regulation is going to change in the coming year. 62% of financial services hold that there will be a bigger change compared to previous years, and 22% expect the changes to be significant.

Here’s the deal: only 31% of the businesses in the US outsource their compliance functionality, choosing to bear the costs themselves.

This is startling, considering that investing in third-party security intelligence systems not only aided compliance but saved online businesses 2.8 million US dollars in 2017.

There are similar stories around fraud (AVS is rated the most effective tool to combat fraud and only 50% of US merchants reject an order if it fails an AVS check), the costs of credit card processing (the card acceptance fees merchants consider and the overall costs they fail to plan for), and chargebacks (did you know 90% of chargebacks are fraudulent?)

It’s worth taking a look at the outside view on credit card processing.

As you might guess, there’s no dearth of information that could contribute to this outside view on credit card processing. With so many players with skin in the game, everyone’s got some data to mine.

Card networks and financial services release reports on how their cards are used and the trends they’re seeing in the market.

And independent agencies release their fair share of information as well — The Nilson Report, for example, collects data from multiple card networks and banks to put together insights into fraud, the credit card market, and sales habits.

All that remains is to wrangle with the data, so it makes sense in light of the choices that someone thinking about selling online needs to make.

Easier said than done. Finding a signal in all this noise is like trying to find a polar bear in an ice storm.

We’ve curated all the information you need

You’ve got choices to make: from what your costs are (this is more in your control than you think), how you approach fraud, how much you invest in adjacent services, and who you might get in touch with when something goes wrong.

We’ve crawled through over 52 reports on credit card processing. Studies, surveys, and data that point to trends in the market and predictions for the health of credit cards in a globally shifting culture.

All to give you the outside view.

Here’s the collection of curated statistics that we think are relevant to these crucial choices.

The data we put together is divided into four broad categories.

Reduced to a line, the data within these categories might not surprise you at all. Digging into the nuance, though, an outside view begins to form.

You might have known that e-wallets would finally start to hit their stride in 2017, for example.

But only 16% of US consumers have actually used an e-wallet as of 2018. E-wallets might be the future, but the road is long and bumpy. Consumer awareness around e-wallets is still very low.

The data points to trends like these, that anyone accepting card payments online ought to be thinking about.

To make an informed choice about credit card processing, you need to weigh the costs, the standard of compliance and security you can bring to the table, and the health of cards as a payment method.

The collection of statistics we’ve put together will, at the very least, put a few of these credit card processing decisions in perspective.

Take me to the collection already! 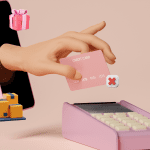 Steps to Foolproof Payment Recovery for Your Subscription Box Business