TouchNote is a creative platform that helps 100,000+ subscribers worldwide send personalized cards and gifts to their loved ones.

How TouchNote Tackled a Cancellation Surge & Increased Save Rate by 56%

Risk of cancellation surge for the bulk of its new subscribers

Lack of insights on churn and retention offers

As one of the first subscription card-sending services, TouchNote reinvented personal communication, enabling a powerful 100,000+ strong community to send handcrafted postcards and greeting cards straight from their phones. It operates across 180 countries, delivering 15M+’ connections’ and ranks as one of the fastest-growing European tech companies according to Deloitte Fast50 (2015), Sunday Times TechTrack (2017), and Financial Times 1000 (2018).

The Challenge: Caution Over Potential Subscription Adrenaline Wearing Off

TouchNote’s eCommerce store offers both one-time purchases and multi-tiered subscriptions for customers. Subscriptions for both monthly and yearly plans are managed directly from Chargebee, enabling customers to send cards periodically and at discounted rates. 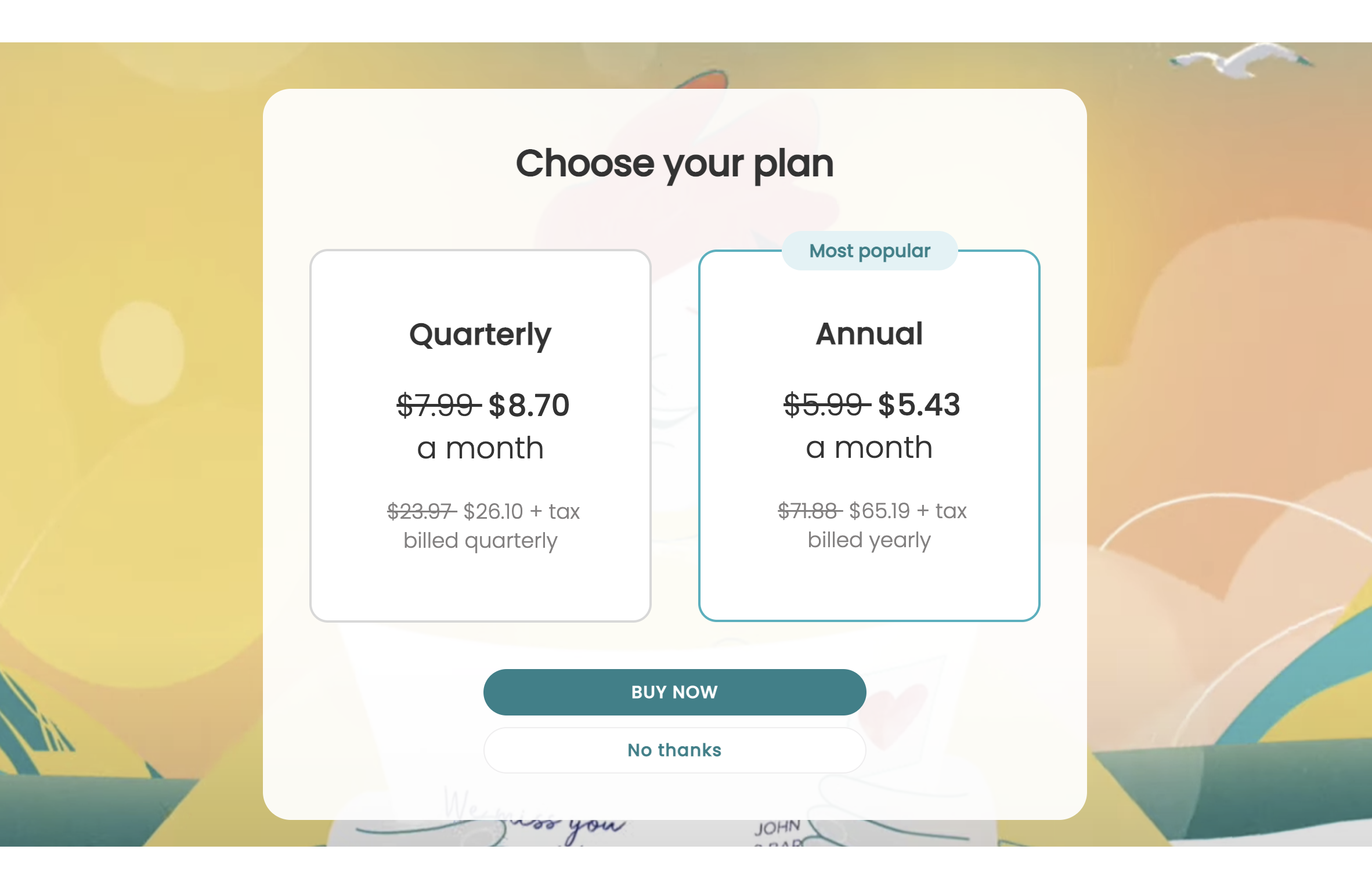 As the pandemic-induced isolation started to weigh heavy, people worldwide sought authentic, tangible communication to feel closer to their loved ones. As a result, TouchNote experienced explosive growth in March 2020 and witnessed a doubling subscriber count in just a few months, increasing new subscription revenue.

However, a bulk of their subscribers preferred the yearly subscription plan (two gift cards/month for the year), which carried a significant downside risk: The likelihood of customers renewing their subscription post the first year could make or break their recurring revenue flywheel. It was imperative for TouchNote to optimize the cancellation flow and ensure these customers were satisfied to decrease potential cancellations.

“We acquired so many customers that the growth of TouchNote depended on keeping our existing customer base on renewal,” said Camilla O’Connell, Growth Marketing Executive at TouchNote.

Brightback, a Chargebee product, was already implemented and integrated with TouchNote’s tech stack when the business focus started shifting towards retention at the beginning of 2020. The TouchNote team used Brightback Audiences to separate their international vs. domestic customers. 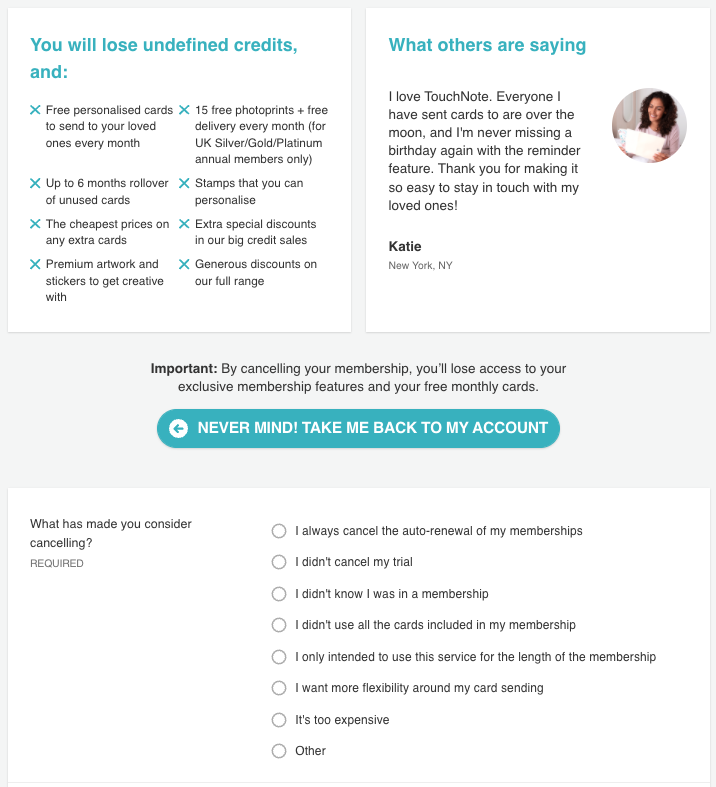 To forestall any customer cancellation cliff, the TouchNote team began a strategic and targeted offer testing program. They tested different discount offers — 40% off, 50% off, and a $23.99 discount (roughly equivalent to 50% off). In addition, they included options to pause or downgrade to a lower subscription tier.

From July 2020, Brightback testing was front and center to give customers options and improve our save rates. It is much cheaper to retain a customer than acquire a new one, so this became a core focus for hitting our growth numbers.

The Result: 56% Increase in Save Rate in Less Than 12 Months

Optimizations performed on Brightback’s full-funnel testing plan across discounts, free cards, upgrades, and pause offers helped TouchNote improve save performance from 16% to 25% in a year. 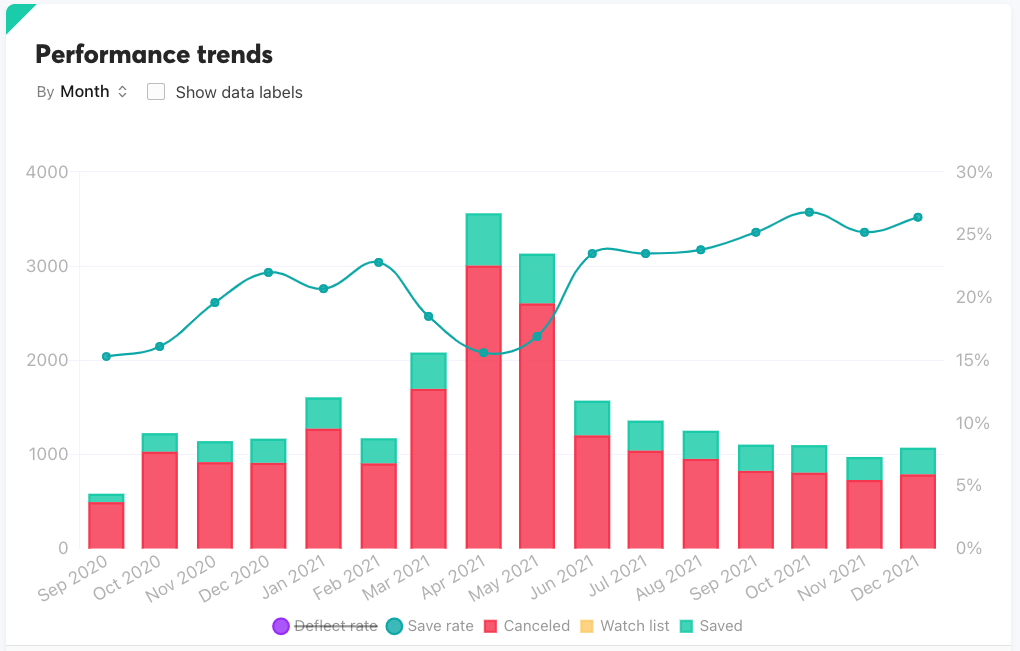 TouchNote’s Save Performance trend in 2021

On further analysis, Brightback also found that the 40% discount offer performed almost identically to a 50% offer. This insight helped them decrease the lost revenue from offers for the same result. 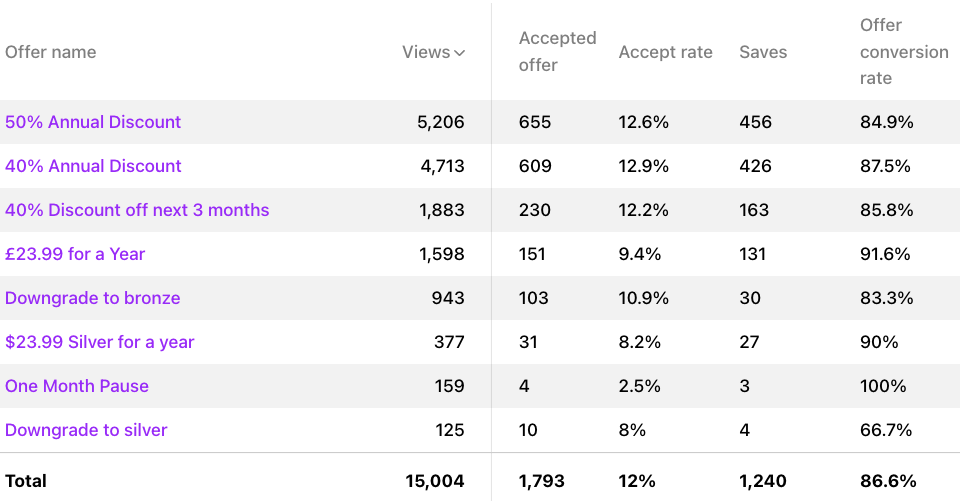 50% annual discount performs the same as 40%

In addition to testing cancel experiences, the TouchNote team proactively engaged customers who were at risk of canceling their plan because they hadn’t used all their cards. A specific nurture journey was put in place to encourage these customers to use the cards in their subscription, reducing potential cancellations by addressing the cancel intent early.

Despite there being the potential for a huge cancellation cliff, our overall [cancellation] numbers only increased by a few percentage points in those critical months in 2021. This showed that the combined approach of proactive outreach and cancel offer optimization was working.
Camilla O'ConnellGrowth Marketing Executive, TouchNote