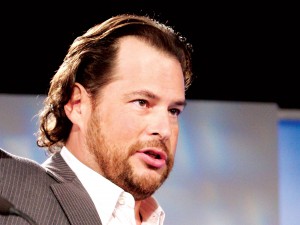 Is there are better role model for entrepreneurs in the SaaS industry than Marc Benioff? We all aspire to achieve the success of the Chairman and CEO of Salesforce, the first enterprise cloud company to reach 3 billion in annual revenue, whose software is used by 70% of Fortune 100 companies.

Despite the fact that Forbes Contributor and LiveOffice CEO Nick Mehta has admitted that he was initially less than impressed by the fact that Benioff isn’t a stereotypical suave CEO, he remains one of the best minds in the SaaS industry and his visionary company is responsible for the overhaul of the IT industry as we know it. Here are five lessons from his success applicable to any subscription business:

In 2012, an estimated 70% of companies have adopted social networking as a tool for marketing and customer service. In October 2012, Benioff was quoted as stating that social media is the single biggest driver of business for the SaaS industry. In his words, “the social revolution is a trust revolution.” Benioff is a firm believer that treating your customers like friends is key to building trust among your prospects and clients.

2. Be Ready to Evolve

Benioff’s Salesforce is known for their ability to change rapidly – according to Mehta, it’s the reason none of their competitors can keep up. It’s not easy to redirect 5,000 employees, but Benioff manages by inspiring total buy-in among his employees. Build a corporate culture of employees who are flexible and eager to adapt changes that will put you at the forefront of the SaaS industry.

3. Products Are People, Too

Dreamforce is known throughout the IT industry as a tradeshow that isn’t horribly boring. In fact, it’s a high-energy, interactive atmosphere, and Benioff encourages this environment as much as possible. Customer case studies are showcased in every presentation, and according to Mehta, conference attendees “actually wanted to talk and learn. They were excited.” A product can be beaten by competitors, but a community of engaged users will soar to the peak of the SaaS industry.

Benioff is known for being slightly confrontational at times. In presentations and interviews, he’s not afraid to speak frankly about Oracle. He describes Salesforce users as being a “revolution against the old guard.” Your prospects want to know how your product is different and better than other options available in the SaaS industry. Let them know by addressing specifically what you have to offer, with the intention of inspiring prospects to join your community.