How we do Continuous Customer Development at Chargebee

It was just a regular Monday afternoon meeting, right before lunch. And it was a question we routinely ask ourselves every few months. Yet, looking around at the faces in the room, you knew this wasn’t going to be the usual 15-minute standup.

Unless you’re selling dental floss for cats, this isn’t an easy question to answer.*

For us, at Chargebee, this was an even tougher problem. Businesses right from super-early-stage startups, and all the way through to Fortune 500 Enterprises rely on Chargebee to manage their billing and subscriptions.

At early and growth-stage businesses, the C-suite is a direct owner in evaluating subscription management solutions. Since billing and invoicing directly tie into how revenue is realized and recognized, finance teams, at a certain stage, are critical stakeholders. Sales and marketing care about streamlining how new subscribers are brought in and won. And since for most SaaS businesses the decision for a billing product is tied to achieving more product flexibility without investing in non-core lines of code, product teams and developers have a heavy say in it, as well (totally unrelated, but if you are a developer, you should check out our API docs).

You get the drift.

In short, we sell to subscription businesses across horizontals and verticals. With wide-ranging process maturities. To pretty much every stakeholder in the revenue cycle.

– not a particularly great answer to a great question.

If you’re selling to everyone, chances are you’re actually selling to no one. – Tweet

But the quest to answer it had just begun…

Sometime last August, our user research team called us in to present an early analysis of our (now new) Salesforce integration. They’d analyzed and mapped an expansive array of our SaaS customers’ sales and subscription workflows to capture the unique cases we’d need to solve for.

But standing a sufficiently safe distance from the presentation, we noticed something else – a pattern, that could’ve easily been overlooked earlier.

When we abstracted it, every single one of these seemingly unique SaaS processes could be bucketed into a handful of rather repeatable revenue workflows.

Once we saw this, “workflows” started cropping up everywhere. We noticed that every time we went into the depths to understand a prospect’s workflow, we were able to drive significantly more productive sales and support conversations.

And so we started out on our quest to draw out these workflow patterns. If you’ve been a Chargebee customer for a while, you might remember the series of emails you got, and perhaps the interviews that followed where we asked you about your subscription processes and revenue cycles. Through these calls we diligently mapped out each customers’ subscription workflow and shared it back, highlighting areas they could potentially optimize to boost their revenue.

But this exercise surfaced a rather interesting observation beyond workflows: Every one of the customers we spoke with fell into two clear categories – those that hadn’t realized their subscription revenue workflow yet and were intimidated by its complexity. And those that had, and were obsessed with driving out inefficiencies in it.

There are two kinds of businesses in this world. Those obsessed with driving out inefficiencies in their revenue cycle. And those too intimidated by it. – Tweet

Perhaps we’d been asking the wrong question all along. Perhaps we should have instead been asking: “But what exactly are we selling, in the first place?”

The answer, we realized, was both simple and profound. We were selling a simpler subscription workflow, and the means to optimize every part of it.

Before you can answer the “who” to your marketing, you need to be able to articulate the “what” and the “why” rather clearly. – Tweet

But our quest wasn’t done yet. After all, every research runs the risk of Question bias. And since we were driving the narrative through the previous research, there was a good chance we had subconsciously biased the answers by how we’d framed our questions.

Balancing out the bias

For the next part, we chose to go after conversations that we couldn’t have influenced in any way. We started digging through the archives, reading support tickets, and listening to sales calls. We listened to customers and prospects across industries and business sizes. We listened to the ones that loved Chargebee, the ones with complaints, those that converted, and those that dropped off at various stages of our sales and marketing funnels.

We mapped these conversations into a Value-Proposition Canvas.

Now, a value prop canvas is something you’d ideally do at the early pre-PMF stages of your business.

But it’s an incredibly powerful tool when you’re trying to fit Customer Development and Product Direction. I’d highly recommend every organization to question and build their Value-Prop Canvas at least once in six months.

At the end of this exercise, we had a neat mapping of our customers and what we delivered to them. On one side, we had the jobs our customers were hiring Chargebee to do, the pains they faced every day, and their dreams and aspirations.  On the other, we had the specific pain killers, gain creators, and capabilities to help them get there.

The best way to prevent falling out-of-touch with your customers – get back to your Value Prop Canvas every 6 months. – Tweet

And this time, we had an even more exciting realization.

Prospects came to Chargebee because their existing subscription process just wouldn’t scale anymore. Across business sizes, their Zero Moment of Truth*** with Chargebee was when they realized they wanted more control over what gets automated and how it gets automated. When they realized their existing systems to manage subscriptions were only holding them back.

So what exactly do we sell?

We sell a non-intimidating subscription revenue workflow. One that lets the business focus on maximizing revenue and scaling up, instead of babysitting their billing infrastructure.

When and why do these people buy Chargebee?

Every user who came to us had a messy workflow. One workaround after another, one diversion after another, each leak and inefficiency left them with a further tangled workflow.

They realized their revenue workflow was a bowl of Spaghetti. And that it was time they straightened it out and drove efficiencies into it.

We don’t sell to the roles people have. We sell to the hats they wear every time they notice a gap in their subscription cycle and start to obsessively focus on driving Revenue Operational Efficiency. And we help them untangle this Spaghetti in their billing and subscription operations.

For us, this has been a huge journey. We’ve been working on enabling revenue opportunities in subscriptions since the day we launched, seven years ago. But this new-found knowledge gives a strong sense of purpose and clarity.

Over the last few months, we’ve been pointing our product, sales, and marketing efforts towards this true north. And we’ve slowly percolated the thought through how we introduce ourselves and the problems we solve at Chargebee.

The real adventure is just starting, but it’s been an interesting journey of research, validation, and feedback already. Over the next few weeks, we’ll follow this story up with how this realization has impacted our perspectives on what and how we build and deliver.

I hope our process to customer development and learnings along the way have a few nuggets of gold for other SaaS and subscription businesses like yours. If you’re starting to obsess with your revenue operations, drawing out your subscription revenue workflow would be a great start.

* In fact, even then it gets hard. Do you sell to cat owners, or directly to smart amazon-savvy cats with questionable dental hygiene? But hey, now you know the research framework to get there…

** To build the workflow playbook, we started by co-creating each customer’s workflow with them over a call. We then took this back to the entire team and had our product, sales, marketing, and support brainstorm where we could add the most value to this business. Finally, we collated this into a personalized guide that we now share with each prospect.

Interestingly, the Workflow Playbook became a brilliant conversation opener in our sales calls – because we could fast-track the regular “discovery” phase and jump right into the value points.

*** The Zero Moment of Truth is that point in a customers’ buying journey when they realize their need for your service. It’s the point where your message flips from “irrelevant” to “irresistible”.

**** The difference between “roles” and “hats” isn’t radically new. It’s been around in the B2C space forever. Aspirin doesn’t sell to CTOs or construction workers. It sells to the specific hats they wear when they have a fever. But as B2B businesses we often tend to blindsight ourselves to anything that falls beyond the scope of a dropdown in our CRM.

Get the scoop on what's new
Related Read | ~12 min 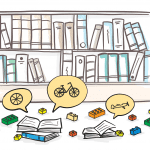